Jaguar begins deliveries of its flagship XJ in India 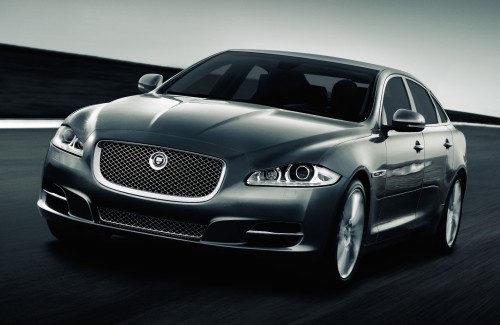 Jaguar XJ is a very special car to me. When I first caught a glimpse of the test car without any badges in Silverstone, UK back in July 2009, I thought the mighty Jaguar would be taking on the Rolls Royce Phantom and the Bentleys. Only when the car was officially launched as an XJ, I realized this car is going to compete against the best of Germany- the S-class, 7-series and the A8.

The presence of the Jaguar XJ is immense, the car is longer than a 7-series, wider than a Rolls Royce Phantom and sexier than a Maserati Quattroporte. The car is typically a Jaguar, pure British charm.

Tata's ownership of Jaguar popularized the brand even more and the Jaguars always had a market in India. Till now Jaguar has been selling only XFs, XKs and now Jaguar would begin deliveries of the XJ for its customers.

Tata brought Jaguar and Land Rover to India in June 2009 and it is more than happy with Jaguar's performance in the Indian market. Tata claims Jaguar is doing better in India than its German rivals from Mercedes, BMW and Audi. Tata is also planning to increase the number of Jaguar dealers from 2 to 8 in the coming months.

The car would be a CBU import and would come with a 5.0l naturally aspirated V8 petrol engine producing 385 bhp and 515 Nm of torque. The car comes with a 6-speed automatic tranny with paddle shifts.  This car is extremely opulent and is loaded to the gills.

Jaguar Land Rover has begun deliveries of the iconic Jaguar XJ in India. The car was shown in India during the Delhi Auto Expo in January this year and the stunningly beautiful and revolutionary new product from the Jaguar stable was acclaimed by one and all.

Commenting on the occasion, Mr S Krishnan, Tata Motors’ Senior Vice President (Commercial), Passenger Car Business Unit, said, “We notice a very intense aspiration in India to own an XJ. We are encouraged by the number of customers who have expressed a desire to own this iconic car.”

Sleek, sporting and sophisticated, the all-new Jaguar XJ brings a daring new spirit to automotive luxury. It offers a seductive mix of striking design, breathtaking performance and engineering. The elongated teardrop shape of the side windows establishes the car’s silhouette and lies at the heart of its flowing design. It does not just look streamlined -- its drag coefficient of 0.29 makes it the most aerodynamic Jaguar ever, along with the XF.

At the heart of the all-new XJ’s construction is Jaguar’s unique lightweight vehicle architecture. Primarily aluminum, but also using magnesium and composite alloys, this allows Jaguar to produce a significantly lighter and stiffer body – the lightest in its class. The structure features aerospace-based riveting and bonding processes, and uses these advanced materials to deliver improved strength, enhanced refinement and superior safety performance.

A coupé profile cloaks a cabin that offers comparable levels of space to saloons with a more conventional style. There is generous accommodation for five occupants. The exquisitely designed interior has a strong sporting character throughout. The spacious cabin is rich in the tactile delight of soft-glove leather, warm veneers and cool chrome.The panoramic glass roof dramatically enhances the sense of light and space inside.

In keeping with its status as the ultimate four-door Jaguar, the XJ introduces a new generation of interior technologies, pioneering the use of display and infotainment systems such as the innovative Virtual Instrument dials, 8” full color Dual View technology Touch Screen display and 1200W Bowers & Wilkins premium surround sound system.

The new XJ is available in India in the long wheelbase version. It is powered by the highly acclaimed 5.0-litre 385PS AJ-V8 Gen III naturally aspirated direct-injection V8 petrol engine. More information on the product is available on the Jaguar India website at www.jaguar.in