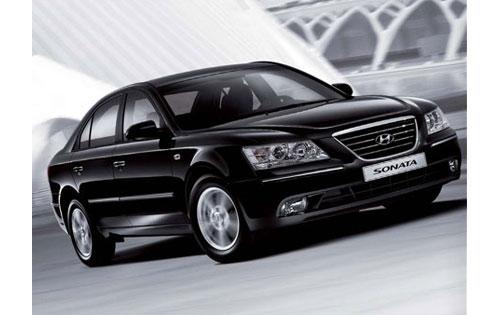 The Hyundai Sonata Transform 2.4 petrol engine has achieved 4.5 stars on a maximum possible 5 in the Green Vehicle Guide (GVG) rating in Australia. This is achieved in models produced from December 2008.

Minor modifications were implemented in the 2.4-liter engine resulting in increase of power to 175bhp (up from 165bhp) and also reducing emissions resulting in an improved air pollution rating.

This Sonata makes for a perfect green choice. It is in fact the greenest in its segment thereby offering both prospective private and fleet buyers a greener choice.

The Sonata is also available in India with a 2.0 litre CRDi turbo-Diesel engine that produces 150bhp (up from 142bhp in the older version)

Minor modifications were implemented in December 2008 production, further reducing emissions and resulting in an improved air pollution rating - this has boosted the overall score.

The Hyundai Sonata 2.4 petrol engine now ranks amongst the greenest cars in the GVG’s large segment, offering both prospective private and fleet buyers a greener choice.

The GVG is a government-run online information service that provides details of the environmental performance of all new vehicles sold in Australia.  The overall vehicle star rating is based on the sum of the air pollution and greenhouse ratings.

Equal weighting is given to both these ratings to arrive at a combined GVG rating (out of 20), which then is translated into the star rating.  The more stars, the more environmentally friendly the vehicle, with 5 stars being the maximum.

Hyundai is committed to improving the environmental performance of its range.  The Sonata is also available with a 2.0 litre CRDi turbo-Diesel engine.