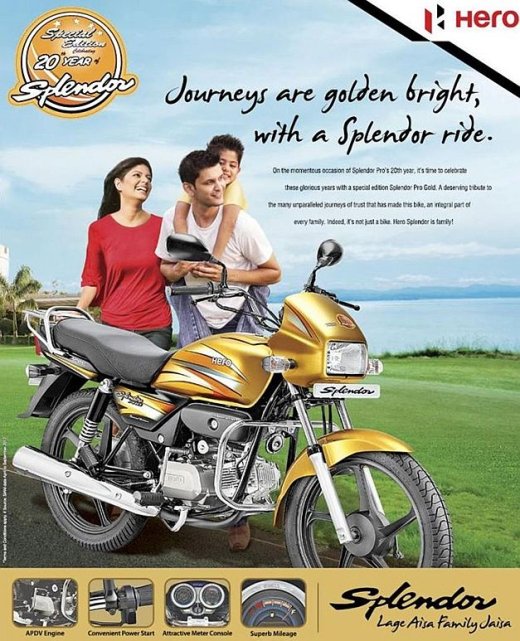 The tussle for the top honors in the two-wheeler market started unfolding since the two outfits decided to part ways in 2011. Honda laid down the gauntlet a few days back as they announced the arrival of the Dream Neo, an apparent rival to the world's best-selling Splendor. In what was portrayed to be the 20th anniversary celebration edition, Hero's objective is to turn back the attention towards its side.

Hero has made no changes at all to its iconic four stroke 100cc commuter. The engine peaks at 7.8 PS of power at 7,500 rpm while the maximum torque is as high as 8.04 Nm at 4,500 rpm. A four-speed gearbox transmits the power. So what are the diminutive changes that are made to the appearance of the Hero Splendor Pro Gold special edition?

As the name suggests, the celebration edition sports a Gold paint job with a “special edition” badge indicating its uniqueness in style. Priced at Rs. 48,500  ex-showroom Delhi, the special edition is roughly thousand rupees more than the regular model.

The resilient Indian bike maker has come a long way to establish its market supremacy which had hardly been tested over the years or even decades for that matter. Can Dream Neo snatch Splendor's reputation?