Details on next generation Suzuki Swift debuting next year 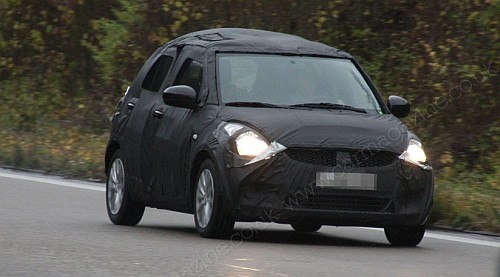 The next generation Swift comes with more space and more power

Suzuki is preparing the next generation Suzuki Swift for autumn launch next year. The existing model was launched back in 2005 and immediately went on to win the COTY award.

Viewing various spyshots captured over the last few months, one understands the new Swift will rely heavily on the outgoing model for inspiration. It doesn't have look elsewhere for that. Swifts account to 40% of Suzuki sales in Europe and is the best selling model in UK.

The new face of Suzuki will feature on the Swift after it debuted on the Kizashi. Suzuki is also planning to use the Swift to provide the world with an affordable hybrid car. It has shown a mock-up of the Suzuki Swift plug-in hybrid at the Tokyo Motor Show last month.

For India, the new Suzuki Swift is expected to come with with the 1.2 K-Series petrol engine. Suzuki could continue the Multi-jet engine and supplement it with more powerful engines like the 1.5 liter CRDI unit.

Internationally, 1.3, 1.5 and 1.6L petrol engines are expected to make the cut. Japanese customers are used to AWD models and for that market, Suzuki will offer the 1.6L VVT engine delivering 125 bhp with AWD.

Suzuki has also introduced hybrid system on the Swift. Operated solely on battery, the hybrid Swift can travel 20 km. This model could come at a later date, possibly in late 2011 or early 2012.

Suzuki will formally launch the new Swift during the Paris Motor Show in the second half of 2010.