The Buick Excelle, a rebadged Chevrolet Optra, has led a steady life in China. Despite being a seven year old model, it clocked 30k units last month. To run the model, which started life as the Daewoo Lacetti, for the next few years, GM has planned a cosmetic revision for the car. 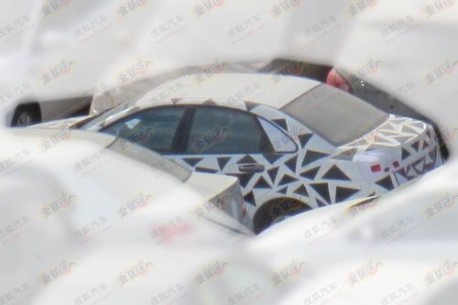 The spyshots don't reveal every change but we can expect the lights, grille, bumper and the wheels to go under the knife. CarNewsChina reports that the facelifted Buick Excelle will be shown at the Beijing Motor Show in April.

The transformation is only skin deep. The 110hp 1.6-liter petrol engine is likely to continue till the model decides to pass on.

The Optra has been pushed to the corner by new entrants like the Vento, Sunny and Verna. Many customers for this segment have to be told that GM India has a model in this segment in the name of Optra. At most, GM manages to ship a few hundred units despite having the best rear seat comfort and a bomb of a diesel engine from the Cruze.

As we've observed in the past, GM India may refrain from investing in an older platform. The Chevrolet Optra facelift may never come true. A mini SUV could be a good replacement if the Optra decides to call it a day.