The Audi A3 Sedan is the latest member from Team Ingolstadt. Being the smallest and most affordable sedan in the Audi range, the A3 Sedan is an important model for markets such as India and China. The car was globally unveiled in China during Auto Shanghai 2013 and is destined to the showrooms by the end of this year. When we spoke to Mr. Michael Perschke, Head of Audi India, he said that the A3 Sedan was "ideally suited to the Indian car buyer" and that he would "start with the A3 Sedan" before moving to hatchbacks such as the A3 Sportback.

The A3 Sedan was caught testing on the Chinese roads without any camouflage recently. This comes as an indication that Audi is well ahead of schedule in launching the car in China. It is to be noted that the A3 Sedan would be made by Audi in conjunction with FAW for the Chinese market. 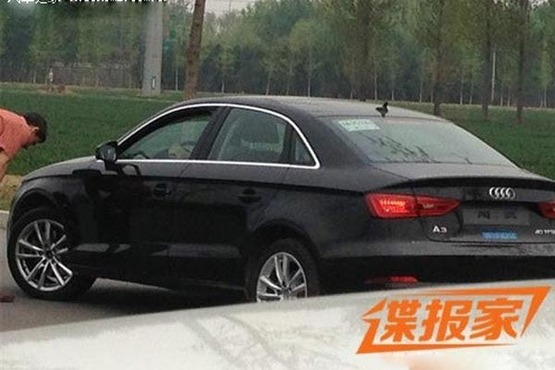 The A3 Sedan measures about 4.46 meters in length while the wheelbase of the car is about 2.64 meters. Audi will offer a single diesel engine in the form of a 2.0 TDI producing 150bhp of power and 320Nm of torque.

Two petrol engines in the form of a 1.4 TFSI and a 1.8 TFSI will also be on offer. Apart from these engines, Audi will also offer the performance oriented S3 Sedan with a 2.0 TFSI engine. However, whether this engine makes it to India immediately is still an unknown. Expect Audi to introduce the A3 in India next year.