Yesterday we brought you the leaked images of the 2014 Suzuki Swift (Maruti Swift in India). The car, by the look of the things, hasn't changed much.

If you were disappointed with the unchanged exteriors, the news doesn't get better for you. While the exterior of the car features subtle changes, the interior continues exactly as it is in the current car.

The dashboard layout, backlight theme of instrument panel and central console are all the same. The global models will continue to be offered with seven airbags. Whether Maruti would take a page from Hyundai's (and even Nissan's) book and offer an airbag-rich variant, we're not sure. The current i20 gets 6 airbags while the upcoming Nissan Micra facelift gets 4 airbags.

The exterior of the car sports LED daytime running lights that are mounted in the foglight enclosure. The turn indicators on the front fenders are now integrated into the ORVMs. The rest of the car stays untouched.

The specifications are not gonna change either. The same 1.2 litre K-Series petrol engine and the 1.3 litre DDiS (Fiat MultiJet) diesel engine will continue to do the duty. The petrol motor produces 86bhp in the Indian version but in international versions, the motor puts out 94bhp. The diesel engine develops 74bhp which is uniform globally. 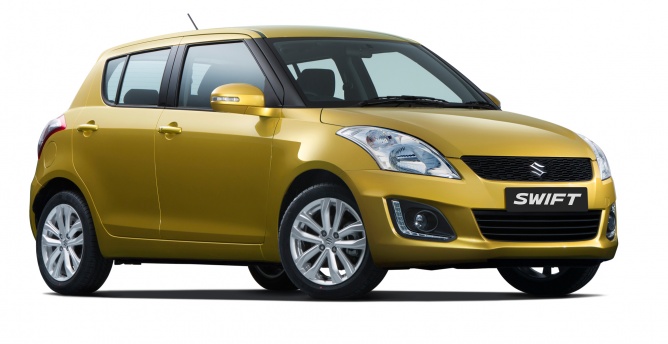 The Suzuki Swift facelift is expected to make its public debut at the Frankfurt Motor Show in September.

Here is an IndianAutosBlog top tip: If you just bought a Swift, all you need to do is to walk into your local accessory shop, get the Hyundai i20's daytime running light installed as seen in the image above and voila! You've a 2014 MY Swift!