Will be offered with the 1.5L diesel engine in two power states.

Seen here are images of the India-spec Renault Lodgy, which is expected to go on sale by the end of April. The Lodgy in these images is the standard variant and not the Stepway which will form the top-end of the variant line, with enrichment like skid plates, silver roof rails and side body cladding.

With a variant nomenclature similar to other Renault cars sold in India, this Lodgy is the top-end RxZ model. As a result, features such as 15-inch alloy wheels, front and rear power windows, steering mounted controls, a touchscreen Media NAV system, tray tables on the seat back, rear view camera, reverse parking sensors and dedicated AC vents for the rear passengers are part of the equipment on offer. The roof-mounted air-conditioner has been specially developed for the India-spec car, Autocar India reports.

Power for the Lodgy will come from the same 1.5-liter four-cylinder K9K diesel engine seen on other Renault-Nissan vehicles, but gets electronic updates which the publication says has resulted in smoother power delivery. Like the Duster, Renault India will offer this unit in power states of 84 bhp and 108.5 bhp, the latter getting a 6-speed manual transmission as against the former's 5-speed unit. A petrol unit will not be offered. 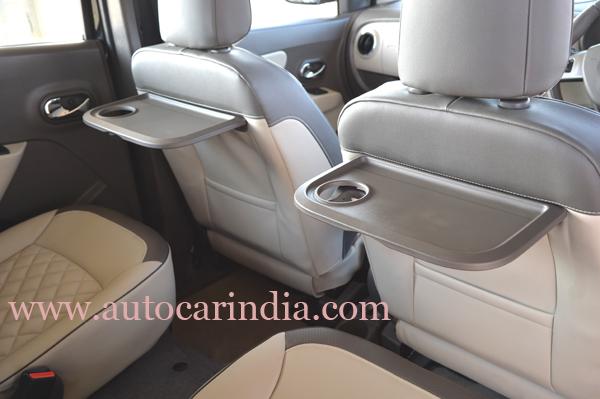 The Lodgy will be the first of two major launches for Renault India this year. The second product, a small car codenamed 'XBA' is expected to be revealed, if not launch in May.