Cars are a much-loved possession, which every man dreams to acquire. Be it a person earning Millions or just few thousands desires to own a car. One's first car is nothing less than a family member - for the attention it gets.

Porsche has always been up there in the pinnacle, apart from posing as cheerful posters on a million bed-room walls! this is a car brand for automobile purists, the precision obsessed, for those who would walk the extra mile for motoring perfection.

These are cars, one could only dream of.  'Porsche', which surmounts the peak of car companies with the slogan, 'There is no substitute', is a blend of style and exhilaration practically infused with passion and a rich heritage, where the body is designed to seduce.

Any Porsche owner hence should obviously be a proud man. Webmaster of 993C4S.com with two Porsche models, is no exception.

You can subscribe to his blog, if you desire to learn about the latest updates.

IAB: When did your passion for cars begin?

I have been a car fan for as long as I can remember.  As a kid, on road trips, I would entertain myself by trying to name the make and model of other cars on the road from as far away as possible. Surprisingly, I still find myself doing the same thing today.  I fell in love with Porsche in the early 80s the first time I got to drive in a friends Porsche 930 Turbo.  The raw, visceral feel and the way it physically forced you deep into the seat during acceleration really got me. It didn't hurt that all the girls seemed to think it was the coolest car ever.. IAB: When did you buy your Porsche?  What other cars do you own.

IAB: That's a lot of cars, Now about your Porsche- Is it 1st hand or second hand, does he/she have a name and where did you take it for the first time? I mean after you bought it.

Both of my Porsches were purchased used. In each case, I wasn't able to drive them upon delivery/purchase.  With the '73, I purchased in mid-winter(2001) in New England (lots of snow and rust causing salt on the ground.)  It wasn't until May of that year that I could first take her out for a ride and I spent the better part of two-hours driving around getting used to the handling and trying not to turn it "ass out" in the corners. :-)  In the case of the 993, I took delivery of this car late on a Friday afternoon.  Where I live, there is no such thing as temporary tags so I had to wait until Monday to go to the registry and get all the paperwork sorted out.  I remember going out to dinner in that car for the first ride and having the valet simply leave the car right in front of the restaurant vs. moving it away and parking it.  I thought that was pretty cool.  I've never been into naming my cars.  The Country Squire gets called "woody" but then again, so does the Jeep. 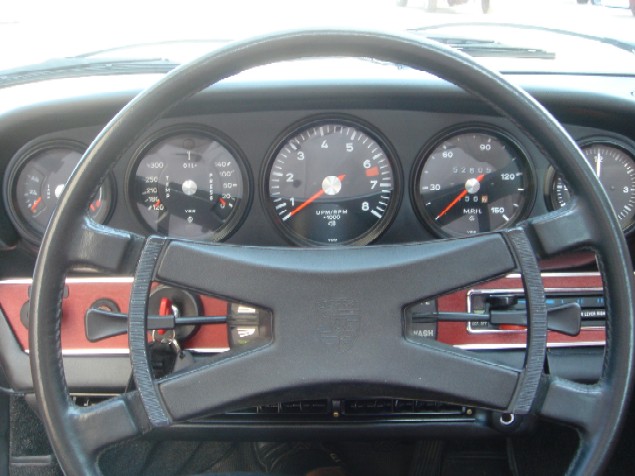 IAB: Tell me about the maintenance part of it. How much you shell out and how frequently? Where do you get it serviced?

Both cars are basically bullet proof.  Outside of routine and scheduled maintenance I have not had to do anything to either of my cars.  I do the basic maintenance myself (oil changes, detailing, etc.) Fortunately, I haven't had anything major happen to either and don't expect anything any time soon. IAB: What is the fastest you have gone on it?

Hmmm. Should I answer this one.  I might as well seeing how I've written about it in How Fast Have you Driven in Your Porsche.  The '73 isn't built for top speed. Anything over 100 mph and the front end starts to get a little squirrelly (meaning you start to lose down force and the front-end starts to lift.)  The 993, as a more modern car, has yet to have the limits tested. To date the needles has reached just north of 150mph.  I'm pretty sure it won't get that high again unless I have some massive straight away, on a track, at my disposal.

IAB: What is the max distance you have covered in it?

Two years ago my wife and I did a 1500 mile road trip (round trip) to Prince Edward Island in Canada.  It was one of the best trips we ever took. Something to note is that I'm a fairly big guy (about 6'3" tall and 260lbs) and I was comfortable throughout the entire trip.  We traveled more than 600 miles on the way up and covered the distance in just over eight hours.  Says volumes about the driveability of a 993 in my opinion.

IAB: How much your car costs (Approx amount)
I paid a premium for both of my cars because of their uniqueness, service history and low miles.  Early 911s have been escalating in price year over year and seem to be holding steady even in these troubled financial times.  For a '73 911 I would expect to pay anywhere from $20k (for a reasonable low end T) to $100k and over for an S model with low miles and excellent service history and provenance. The 993 is the last of the air-cooled Porsches and arguably the "King of All Porsches."  Prices are all over the map for these cars and will depend greatly on year, model, mileage and service history. When purchasing any Porsche, the service history is more important than anything.  If you purchase a used Porsche without knowing its service history you run the risk of repair bills that could easily match your purchase price without even batting an eye lash.  For a nice condition low mile 993 C4S I would expect to pay between $45,000 and $65,000.

IAB:Any modifications you have done on the car?

IAB: Some of the other similar cars you have driven and how they compare.

I've been fortunate enough to drive many, many different luxury and performance cars and written numerous reviews and comparisons on these cars vs. Porsche.  I'm of the opinion that each car has its own set of good and bad.  However, if your after a pure visceral driving thrill combined with over 60 years of quality and heritage, nothing compares to a rear-engined, rear wheel drive Porsche with no electronic helpers to keep the rear-end in line. IAB: How many kms you drive everyday? frequency of use?

I drive my cars whenever I can and as much as possible. Unfortunately, given the part of the country I live in, the driving season is limited to 5 or 6 months.  I try to take the cars for drives on any day the sun is shining!!

IAB: Your point of view on the Indian auto market. Your thoughts on the Tata Nano

I'm fairly new to the Indian auto market and have just recently started reading your site to learn more.  Tata seems like a fantastic company and I would like to see them enter the US market in a big way. I think competition from efficient and well engineered auto makers like Tata can only help everyone involved.

IAB: Fuel. Which type of fuel and engine oil you use ?

I run premium fuel (93 Octane) in all my cars and use Mobil 1 Synthetic oil in all as well.

IAB: What is your next car ?

IAB: Any message to our readers?

Thanks to everyone for looking.  I hope you enjoy reading Indian Autos Blog as much as I do.  There are so many sites out there for the auto enthusiast and sifting through them can be difficult. I keep this one right up on the top of my reader and find the content to be timely and helpful.

Note to the Reader- If any of you have an interest in Porsche, I'd love to have you check out my site and add you as a subscriber.  The best thing about subscribing is if you don't happen to like that days post, you can simply ignore it or delete it. :-)