Maruti Ertiga - A closer look at the Swift-based MPV 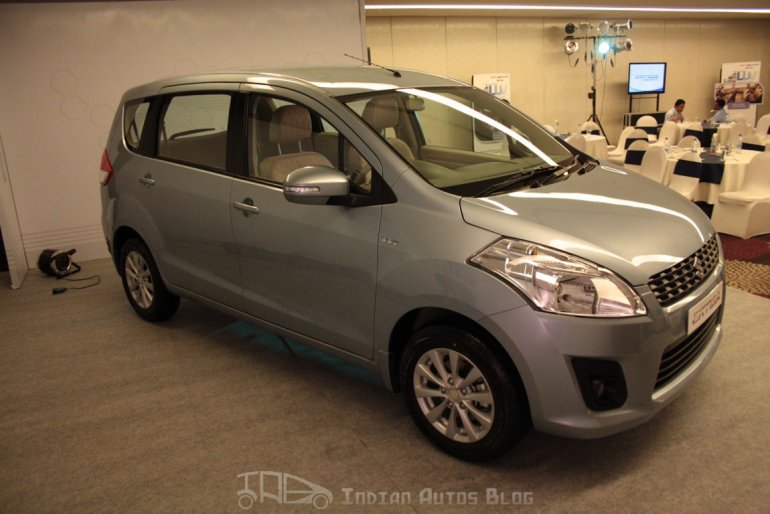 Indian Autos Blog has been flooding readers with photographs of the Ertiga since the Auto Expo debut. Prior to its unveiling too, we had many spyshots sent in by our good readers in North India.

Last evening Kaustubh was invited to the Mumbai region launch and we updated you with prices and pointers a bit late in the night. Today it was my turn to take a closer look at the Ertiga here in Chennai.

The Ertiga is certainly going to create a new segment in our market. For under 10 lakhs, Maruti now offers a well-built, well-equipped value-for-money hatchback, sedan and MPV.

The Mahindra Xylo is now up against a bitter battle with the Ertiga, a compact MPV that is built on a lengthened Swift platform.

You get a low-cost dead pedal but not a driver arm rest; Middle row passengers get AC vents; The usage of the middle row buckling mechanism is not like reaching for a coin under the seat.

Maruti engineers went to Japan and had given plenty of input on the Indian conditions. The aspect ratio of the tire for example is 65, when 55 seemed adequate.

They chose to use a twin AC because India's a hot country. They then worked on the platform extension and did a lot of research on what extended families require.

Why did Maruti create the Ertiga and how much did they spend?

Maruti claims that 3-4 member families contribute to 49% of the pie and these families are likely to gain in strength in the coming years. 14% of the Indian auto market is occupied by utility vehicles (MPV - 9% and SUV - 5%).

This segment has grown by 20% in the last year and is likely to grow at a faster pace in the coming years.

Dashboard is familiar territory if you know the Swift; Steering mounted controls carried over from the Swift; Door pads again similar to the Swift's.

To create a presence in this space, Maruti spent 410 crores on the Ertiga project.

Is the Ertiga available for the commercial market?

Maruti Suzuki is happy to offer this vehicle to taxi operators. It will not change the looks of the vehicle and the current variants, offered to personal customers, without modifications is extended to the taxi segment.

Why is the Ertiga a compact MPV?

Don't misunderstand Maruti's marketing buzz words. The Ertiga is not a sub-4 meter vehicle. It is 4.2 meters long and has a wheelbase of 2.74m which is only 10mm lesser than the Innova's.

The engine is compact, displacing 1.3-liters. The platform it sits on underpins a compact car (Swift). These are some of the attributes for it being called a compact MPV.

Who is Ertiga aimed at?

Maruti is pitching the Ertiga at both hatch and sedan buyers with an extended family.

It is aimed at the customer who requires a large vehicle but is turned off by the bland design, fuel economy, less driving comfort and the high procuring cost that large vehicles are usually associated with.

Does Maruti fear internal cannibalization with the Ertiga and say Dzire or SX4?

Maruti expects only additional volume with this car's introduction though they say its too early to put a number on the table. Having said that, they expect some internal cannibalization. When the Dzire was launched, it ate into 7-8% of the Swift volume.

What are the expectations with the petrol engine considering diesel is turning out to be the more popular choice of variant?

Blinkers neatly embedded into the side mirrors; Rear door is huge and allows easy entry into the cabin

For Ertiga Maruti expects a larger demand in diesel. Internally the executives were thinking of an 80:20 split (diesel:petrol). The aggressive price of petrol variants and the introduction of a new K14 petrol engine are factors Maruti is counting on to sell more petrol cars.

Will Maruti introduce a CNG variant in the future?

CNG is an good opportunity especially in the longer term. With more availability, it is a very good alternative as far as running cost is concerned. 25-30% of demand of WagonR in the NCR region is CNG but immediate availability of CNG is a question mark in many other parts of India.

Luggage space is little when the seats are up; Mysterious hidden compartment under the floor visible; Tools are stored just behind the C-Pillar

Have the bookings begun? How many thousand cars have been booked?

Booking have begun today but Maruti is yet to announce the number of bookings. It is not expected to be along the lines of what the Swift did after its launch (clocked an epic 1 lakh bookings).