Official - Honda Amaze to launch in India on April 11

Through a countdown timer on its official website, Honda India has confirmed the launch of the Amaze on the 11th of April. 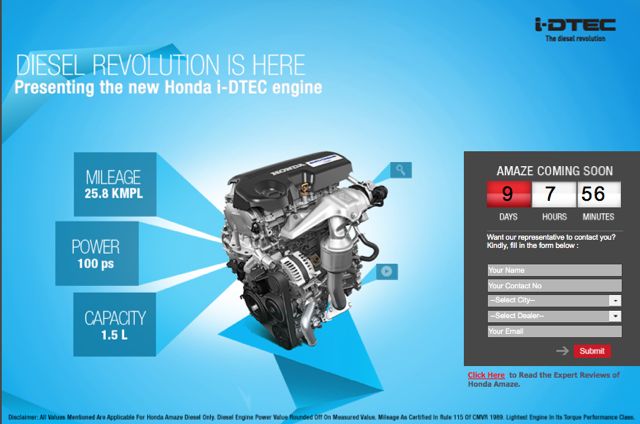 A few Indian Autos Blog readers tipped us on this development and have been recording comments on the same via dealer communications.

The Amaze is Honda's first diesel car in India. Even internationally, Honda's a very inexperienced player in the diesel market with just three engines to their name prior to the introduction of the 1.5L unit.

Their first launch was on the Accord in 2003 with the 2.2L i-CTDi engine followed by the launch of the CR-V with the improved 2.2L i-DTEC engine. The 1.6L i-DTEC engine was launched last year and is today available on the Civic and CR-V in Europe, while the 1.5L i-DTEC, a derivative of this motor and the fourth member in the family, premieres in India this month on the Amaze.

Compared to the Brio, the Amaze is about 60mm longer and has a cushier rear seat with a central arm rest. A compact boot has been cohesively integrated into the C-Pillar raising the boot volume to 400 liters. In other respects, the Brio and Amaze are identical.

The Honda Amaze should be priced at about 30-40k rupees over the Maruti Swift Dzire for every variant.