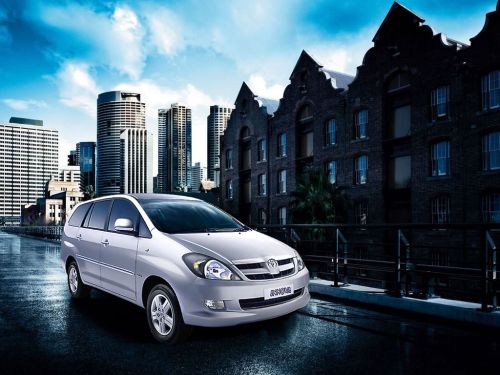 The Japanese carmaker - Toyota Kirloskar is all set to launch its popular MUV in India - Toyota Innova in CNG (Compressed Natural Gas) version by end - January 2009, hoping to stir demand amid sagging sales. The company is also conducting trials of Innova CNG.

It will tie-up with Minda Industries to provide CNG kits for its model. The CNG Innova should be launched commercially some time in January end. At present, we are conducting test trials of the model,said Mr Sandeep Singh, Deputy Managing Director (Marketing), Toyota Kirloskar Motor Pvt Ltd.

The CNG Innova would cost about Rs 75,000-90,000 more. This will include warranty and installation costs.Since the kit has to be approved by Toyota Motor Corporation, Japan, and there is a difference in the installation procedure, our CNG kits will cost more than the usual,said Mr.Singh.

Mr Singh was talking at the sidelines of the launch of the company's express maintenance service at one of its dealerships. It claims to provide service to Toyota's customer in an hour.

Running cost of CNG to be one third of petrol

Sales plan :
With regard to sales, Toyota is aiming to boost Innova's demand, especially in the commercial segment. Toyota's sales in November were 48 per cent lower at 2,087 units. In April-November, sales remained flat at 35,533 units.
About 15-20 per cent of the demand for Innova is met through tour operators and radio taxis amongst others. Considering the running cost of CNG to be one third of petrol, we expect sales to boost up,Mr Singh added. When asked if the company intended to launch such variants on its other models, he said, at the moment we are considering it only for Innova.

IAB Comment: We think that most of the chances are that Toyota will launch CNG version in its upcoming facelifted Innova which was due in this month. The facelift is minor and it is expected to come with refreshed head and tail lamps, bumpers etc. and also features like reverse parking sensors and climate control are expected, but its still a suspense that Toyota will launch CNG in facelifted version or is it just a trick to clear up rest of the Innova's stock ?