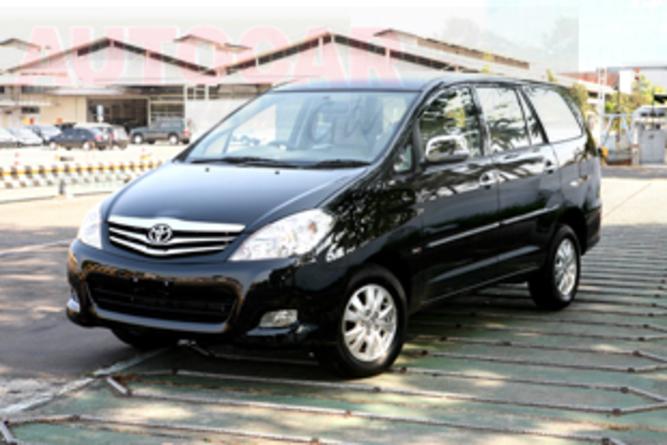 The Toyota Innova has been an immense success. It is considered to be the best all round car by many and even its ad campaign goes by this 'One car - Many roles' and it truly deserves all of the credits. It has also been under scrutiny for being priced at a premium (All Toyota/Honda cars demand a premium in India). The MUV is car like in its characteristics (except its size of course) and this has won many hearts, even those of many women.

Toyota has always been under fire for not bringing its latest models to India and testimony to these are the delay of the very anticipated models like Toyota Fortuner, Toyota Vios and the Toyota Yaris hatchback.

We Indians are still make do with the Innova, Corolla and the Camry. Toyota has updated its Innova in international markets and is expected to get here by this year end. Apparently Toyota understood that at some point it will get competition from the Mahindra Ingenio and the Tata indicruz.

The exterior gets a new radiator grille, with chrome slats for a richer look. Whether Toyota will offer the chrome grille on the base version remains to be seen.

The headlamps are more angular and get the clear-lens treatment (which it should have always got), while the front bumper is all-new, with an angular ridge on either side of the two-piece grille. The fog lamps are new as well. At the rear, Toyota has chosen to give the Innova’s tail-lamps the LED treatment for a bright-eyed look but the rest of the rear remains unchanged.

It is the interiors which have received the bulk of Toyota’s attention. Recognising the need to offer a few more creature comforts to make the Innova appeal to D-segment buyers, the new Innova features the much awaited climate control . An in-dash CD changer and audio controls on the steering wheel is much applauded and add to the vehicle’s appeal.

The refreshed Innova will be in showrooms in December. While the tweaks are minor, with no technical or mechanical upgrades, it will help to hold the market’s interest especially as the Innova will face increasing competition from the likes of Indicruz and the Ingenio in the near future.

Also expected is a price hike especially with features like climate control making their debut.