Toyota in discussion with Japanese HQ for launching Innova/Fortuner facelifts

TKM is discussing with its Japanese headquarters to finalize the time frame and configuration of the facelifted editions of IMV platform derivatives Innova and Fortuner it was revealed to Indian Autos Blog yesterday. 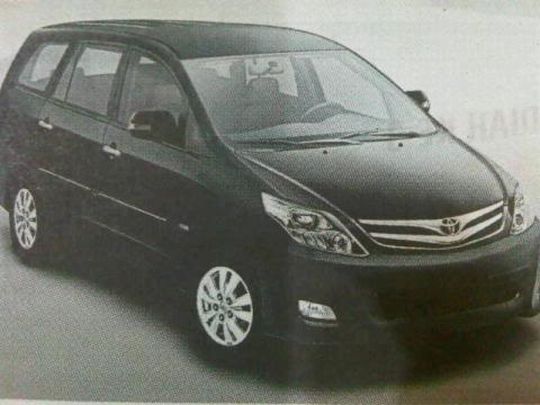 As of now there is no need (for Innova and Fortuner facelift) as both the products are doing well. We are in discussion with TMC (Toyota Motor Corporation) for when we can get those cars. TMC launches products in phased manner. If you see today, Innova and Fortuner are doing very well we will introduce them (facelifts) at the right time because changes are not big in terms of features. Changes are only cosmetic.

Mr Singh's remarks confirms IAB's doubts on the nature of changes on both models (refer Innova facelift and Fortuner facelift images). On posting leaked official photographs and images of test mules, we doubted if there will be any mechanical modifications. The Innova will continue using the turbo intercooled 2.5-liter D4D diesel engine producing 102PS of power and 200Nm of torque where as the rock-hard Fortuner will use the 3.0-liter diesel engine producing 172PS and 343Nm.

The refreshed Innova was provided an intercooler in India recently and immediately after its introduction Toyota offered free brakes upgradation for Fortuner as customers complained of poor feel and stopping capabilities. The brakes of the Prado were fitted to these cars at service centers.

Toyota is also not planning an automatic transmission for the Fortuner as such variants occupy negligible market share. The Fortuner even today demands a waiting period of 3 months in some parts of India. The Mahindra Xylo, designed to take down the Innova, has not ruffled its feathers. A gamut of new offerings are arriving in this segment in the next 18 months starting with the Maruti R3 in six months time, so Toyota has every reason to be worried.