Tata Nano appears out of the blue in Vietnam

Tata Nano, the world's cheapest car in India, has "suddenly appeared" in Hanoi (city in Northern Vietnam) in the form of CBU imports, through a vehicle business dealer, vneconomy.vn reports. 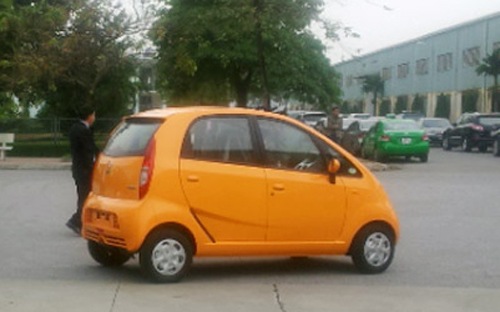 The first Tata Nano to set foot in Hanoi sports a 'Papaya Orange' paintwork, and is equipped with features such as air conditioner and power brakes.

The evaluation done by the Vietnamese turned out to be a favorable one for Tata Motors with the shell reported to be "quite thick" with useful features like power windows.

The Vietnam-bound Nano is powered by the same 0.6-liter petrol engine that turns the rear wheels. It has a fuel efficiency of 25kmpl. Hanoi city is populated with millions of scooter and moped users, which could be the target market for the Nano which was designed to graduate Indian families from two-wheelers into car buyers.

The expected price of the Nano in Vietnam is about 200 million dong (5.20 lakh rupees), the report adds.

Meanwhile Tata Motors back in India is fine-tuning the 2013 CNG and diesel powertrains that are regularly spotted around the Pune area by IndianAutosBlog.com readers. Tata has developed new interior components for the Nano such as glove boxes and door-mounted speakers and launched them on the limited edition model.