Tata Aria comes with a massive discount of Rs. 2.5 lakhs

The Tata Aria is giving sleepless nights to the chaps at Tata Motors because the premium crossover MPV is not at all selling. 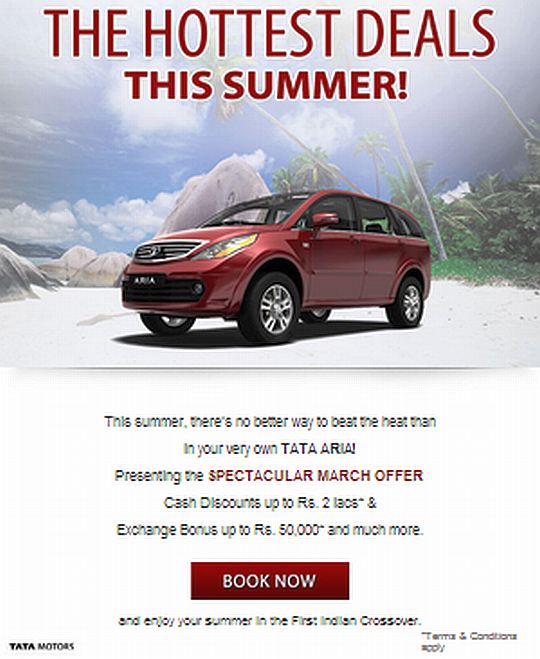 Last month Aria clocked just 4 units which is extremely disappointing. The launch of an entry level variant which is priced at Rs. 9.95 lakhs failed to evoke any response from the car buyers. The SUV duty hike just added fuel to the fire.

Tata Motors have been offering hefty discounts on almost all of its passenger cars. The Aria is now offered with a mouth watering discount of Rs. 2.5 lakhs which makes the car staggering value for money.

The company gives a flat cash discount of Rs. 2 lakhs and an exchange bonus of Rs. 50,000. The discount is definitely going to hurt Tata Motors' already injured profitability but a stagnant inventory hurts even more.

The Aria is a well engineered 7-seater which finds itself ignored in most of the car buyer's discussions. Tata is working on a facelift which would involve "image corrections" to make it appealing.

The MPV is powered by the 2.2 litre DICOR diesel engine which produces 140 bhp. The transmission option is a 5-speed manual. An automatic transmission is on its way, probably along with the facelift.

Tata Motors had showcased the Aria with an Automatic transmission and dual tone paint job at the recently conducted Geneva Motor Show as well.