Driven: The most comprehensive Tata Aria 4X2 review you will read

In October 2010, Tata Motors forayed in the luxury market with the launch of the Aria – a crossover between an MPV and a 4x4 SUV. However, Tata Motors marketed it as a cross between a sedan and an SUV.

Thus you can see the confused state of the product. Is it an MPV? Is it an SUV? How is it a Sedan? So many questions were asked at the press conference during the product launch. But Tata Motors management was adamant that the Aria will be a unique segment in itself. 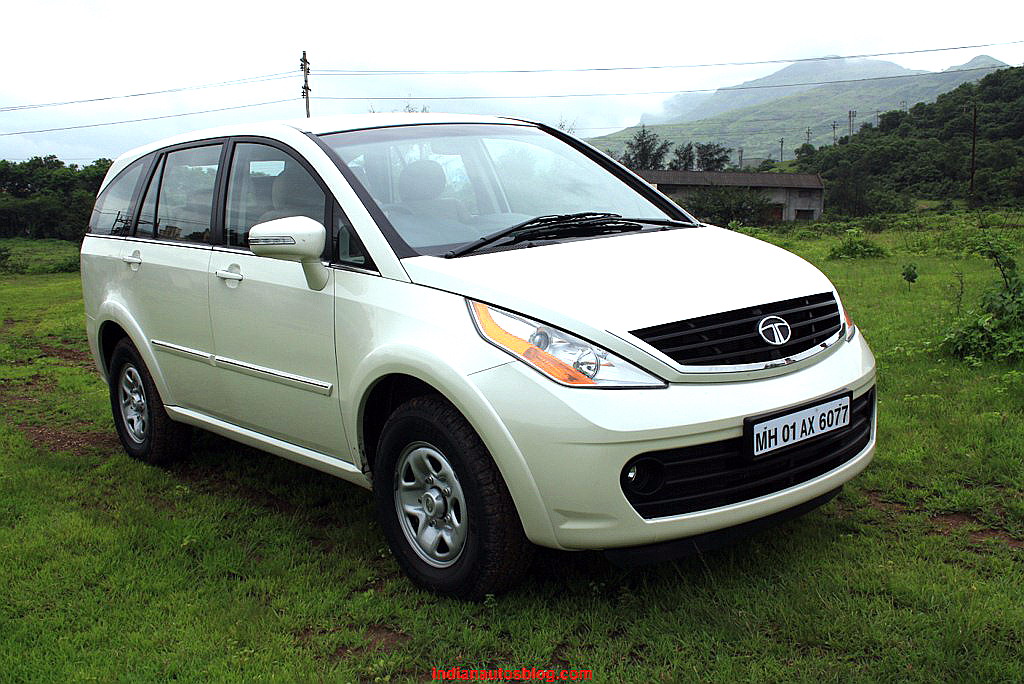 Sadly, things did not work out for Tata Motors. The marketing communication just couldn’t convince the prospective buyers of the uniqueness of Aria. Adding to that, the hefty price tag of 15.5 Lakhs made the consumers move to the established luxury brands rather than a brand that is trying to be one.

The monthly sales of the Aria started dwindling until there came a point when even shipping 100 units per months was looking like an unconquerable mountain.

If you have invested considerable time, money and effort in developing a product from scratch, you would try to make it succeed as much as possible. Tata Motors have been working on the Aria since 2005. So the product was scrutinized again and the necessary changes were made. The two most important problems of the Aria were

Tata Motors realized that they can kill 2 birds with one stone. So they stripped the Aria of its four wheeled drive and thus was born the Aria 4X2 version. Tata Motors launched the Aria 4X2 at an astonishing entry price point of 11.61 lakhs (Pure variant) . Considering, we were always in favor of the 4X2 version and we never reviewed the Aria before, we got ourselves a media car and got cracking!

However before diving into the details, here's a fact file of the Aria 4X2 (or 2WD) -

The roots of the Aria’s design can be found in the XOVER crossover displayed by Tata Motors at the 2005 Geneva Motor show. Since then the Tata Aria has always been a handsome looking brute. It can be said that the Aria is a benchmark of Tata Motors designing prowess. Never did a Tata Motors vehicle looked so good that it could keep up with the international standards.

In the front, you are greeted with sharp, angular, wrapped around headlamps that give the MPV a very aggressive stance. The front fascia is consistent with other Tata Motors vehicles such as Manza and Indica Vista but at the same time it is distinct and up market. The 4x2 version gets a black front grill and the 4X4 version gets a chrome one.

The side profile is of a typical no non sense MPV. The Aria 4x2 Pleasure rides on the 16 inch wheels which seemed to be borrowed from the Tata Safari. 17 inch alloy wheels are only available in the top variant.

The rear is again a familiar Tata design with slender, vertically placed tail lamps and a huge chrome bar with a Tata Motors logo on top. You also get dual exhaust with chrome tips to make it look sporty.

How is the Aria to drive?

Tata vehicles tend to fail miserably in driving dynamics but again there are some surprises in store. The Tata Aria gets its diesel power from the 2.2 DICOR VTT which is borrowed from the Tata Safari. The engine is good for 140 bhp @4000rpm and 320 Nm of Torque@1700- 2700 respectively. It is mated to a Mark-II version of the G76 5-speed manual gearbox. Sorry boys, no automatic here.

The engine feels smooth and refined to drive and the torque is available from as low as 1600 rpm. The low torque makes city driving very convenient. However, the biggest problem is the gearbox.

The gear shifter transfers all the engine vibrations. Adding to that, the turbo lag is a small barrier while accelerating. Overtaking needs to be precisely calculated. It takes time to get used to these things. The shift quality is the best in a Tata vehicle, but more work needs to be done if it has to impress.

The party piece of the Aria is handling which is actually fine-tuned by Lotus Engineering – the best in the business – and it shows. The Aria does not give a hint of body roll in the corners neither does it crash in potholes, everything is absorbed in its stride. The suspension is on the harder side to reduce body roll, but at the same time, it absorbs the bumps and the potholes brilliantly – a trick that is very difficult to pull off.

The suspension set up is as brilliant as the BMW X1 in corners. However, the brakes are a big let down as they are very spongy. In such a big car, (forget power, handling etc) I would want better brakes for sure.

How does it feel inside the Aria?

Inside the Aria, there is a whole new world all together. The ‘Pure’ version (read base variant) gets beige interiors where as the other two (Pride and Pleasure) get black interior with fake wood finish. If I am honest, the Aria interiors are very much influenced by the Range Rover with sharp boxy design all around. It is definitely a refreshing change in the MPV segment.

Let me get straight to the point. This car has some UNBELIEVABLE amount of storage space, cubby holes, cup holders, news paper racks. It is almost as if wherever they could find space, they put a cup holder or sunglasses holder. Each and every space has some sort of storage area hidden underneath it.

Step into the Aria and you will feel that you have stepped into a premium product. The dial cluster is simple and easy to understand. There is also a green band on the tachometer to let you know when would be the optimum gearshift. You also get a small LCD screen that displays various vehicle related information.

The front and the middle row seats are comfortable. Sadly, the third row seats are strictly for children. The Aria is quite a tall car so the cabin feels very roomy and airy. There are separate air con vents for each row of seating and overall air conditioning is pretty well suited for the Indian climate. Baring in mind a few bits and pieces, the build quality is just what is required, not a little more not a little less.

For your entertainment needs, there is 2 DIN stereo with USB and AUX support. There is also a small compartment on the back door for people who want to install a sub woofer. There is GPS available in the top variant as well.

However, there are a few foibles in the interiors also.

What is the fuel economy?

The Aria 4X2 is 200 kg lighter than the 4x4 which translates into better fuel economy. The company claims an ARAI tested mileage of 13.7 kmpl. In the real world, we got between 10 – 11 kmpl.

The base variant of the Aria is equipped with ABS, but that's about it. As you go higher up the line, you get ESP and airbags.

Yes, there are a few places where the Aria scores below average. They are:

If Tata Motors did an Aria Mk 2?

Is this a next generation Tata model?

This is a fantastic effort by Tata Motors. They have achieved what few can boast of. After cars like the Indica and Indigo, it has brought out the Aria which people, at first glance, can mistake for an equivalent Skoda or a Toyota.

For its price, the Aria is the best handling UV. It tackles potholes very well and the ride is leagues ahead of the Safari. Improvements have been made in every department including styling. The interiors are better than the Manza, the comfort is better than the Safari, like all Tatas the fuel economy is good, ingress/egress is easy and the never-ending list of features justifies its price tag. One has to see the car in flesh and test drive it to appreciate or understand it better.

Just because it looks like an Innova and is priced above it, people have shied from it. There's also some horror stories people have heard with the Indicas and Indigos that fanned the flames. While companies cannot change their past, the future is blank canvas they get creative with.

Tata has not chosen not to go to the taxi market with the Aria and their Vista and Manza brands too, are strictly for families. The company's attitude is changing. The process of breaking away from the taxi image will come with more products like the Aria and we wish them luck with their forthcoming ventures.

By stripping the Aria of the four wheeled drive, Tata Motors has managed to pump a dollop of sense in the product giving it a unique identity and clarity. Now, you don’t have to be confused whether this is a Sedan or an SUV. It is a luxury MPV for people who are looking forward to upgrade from the C+ segment. Considering there are no luxury MPVs around in the market, it puts the Aria in a better position.

Sure, Tata Motors did not price it competitively with respect to the Innova and Xylo. But that is not the point of this car because Tata Motors does want to enter into the taxi market with the Aria. They already make enough products for the Taxi market. The Aria is a premium offering and it always will be.

To sum it up, the 4X2 version of the Aria is THE Aria that always should have been.