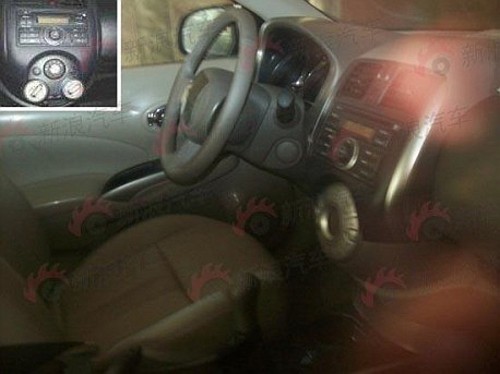 Nissan's new sedan based on the V platform – The Sunny has been of keen interest to IAB. We have been following its progress since the time the first sketches were rolled out. We have brought you everything, right from prototype testing, patent scans to brochure leaks. Now it is time for the official reveal.

**Drumrolls** The New Nissan Sunny will debut at this month’s the Guangzhou Auto Show starting on December 21. This car, more popularly known as the Micra Sedan (although Nissan says it’s a new car altogether and advised all of us from using it) will be Nissan’s first foray into the affordable sedan market in India.

The Sunny will get a 1.5 liter diesel engine mated to a 5-speed manual or CVT gearbox. In India, it will go against –Honda City, VW Vento and Hyundai Verna. There are also talks of a 1.6-liter gasoline engine for India next year, but nothing is official.

From the image, one is able to make out the similarities to the hatch. Parts from the center console, the gear lever, steering wheel and door components are the same.

The Sunny will be launched in the second half of 2011 and will be completely made in India in Nissan’s Chennai plant. In order for the launch to be a successful one, the company plans to increase its dealerships to around 100 by 2013. The Chennai plant capacity will also be increased (if necessary) to take care of growing demand.