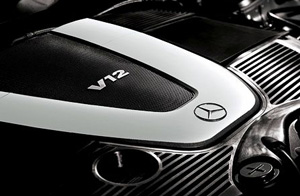 Mercedes-Benz is supposedly developing a new V12 engine (so much for all the 6-cylinder + turbocharger = V12 performance+lower emissions bull shit theory).

This new powerplant is likely to make appearance in the next S-Class, and Aston Martin has also inked a deal with Mercedes for this engine.

Mercedes-Benz' V12 unit will be used in the Aston Martin DB9 and upcoming Rapide after its 2012 release.

Aston Martin at present uses a 6.0-liter V12 Duratec engine sourced from Ford (If you are reading this for the first time, your Fiesta immediately develops a Bond car connection).

It is widely believed that the Aston Martin Rapide would use the same Ford-sourced V12 unit when it embarks production. In the future, Aston might swap the Merc engine in place of the Duratec. People are even saying Aston could delay production dates to bring in the Merc V12 from day one.

Things are muddled but one thing is clear. Aston Martins from 2012 will use Mercedes engines.