When launched later this month, the Maruti Baleno will be positioned as a more premium alternative to the Maruti Swift. Below is a look at how the two cars stack up on the features and specifications front. 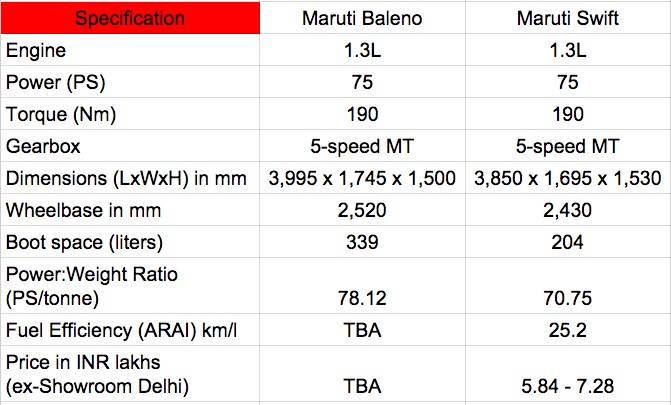 Based on a new platform, the Baleno is longer and wider than the Swift, though the latter is taller by 30 mm. For those who found the Swift to be a bit cramped, it comes as good news that the Baleno's 2,520 mm wheelbase is 90 mm longer than that of the Swift's.

Another area where the Swift drew flak was in its 204 liter boot. At 339 liters, the Baleno has the second largest boot in its segment, though the loading bay is comparatively higher than the Swift's. Under the hood, the engines and gearboxes are the same in both cars, though a CVT is available optionally on the Baleno petrol. Thanks to its lightweight platform (the Baleno is 75 kg lighter than the Swift), the Baleno delivers higher power-weight ratios, about 8.5-10 percent more than the Swift. It is also expected to better the Swift's fuel efficiency, which stands at 20.4 km/l for petrol and 25.2 km/l for diesel. On the outside, the Baleno and the Swift get features such as power adjustable and folding wing mirrors, rear wiper/washer and foglights. However, the Baleno adds to this with projector headlights and LED daytime running lights, 16-inch alloy wheels (the Swift gets 15-inch ones) and LED taillights. On the inside, both cars get automatic AC, keyless entry with push button start, steering mounted controls and a Bluetooth enabled music system. However, the Baleno is loaded with additional equipment like a TFT color screen for the instrument cluster, rake and reach adjustable steering, automatic day/night rear view mirror, automatic headlights, the touchscreen SmartPlay system with GPS navigation and Apple CarPlay and a reverse camera.

On the safety front, both, the Swift and the Baleno get ABS, EBD, dual front airbags and rear parking sensors. However, it should be mentioned that airbags, ABS and EBD are standard across all variants of the Baleno, whereas customers need to opt for the top-end ZXi variant on the Swift to avail these features.