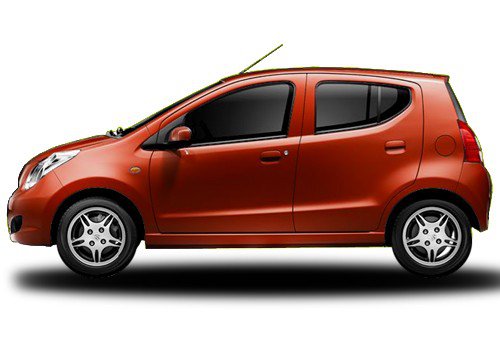 I write this article after spending inside the Suzuki A-Star Automatic, roughly six hours. I've been driving it for three hours in city, highway, rural and partially off-road conditions. The remaining time was spent on keenly observing every other aspect of the car.

I've not had the opportunity of being in an A-Star for this long, so firstly I'd like to tell you how the A-Star comes across - a bubbly, spirited and racy compact car!

My experience with the A-Star previously has been limited. I carried a very cramped-and-underpowered opinion, but that was wiped off after the first few minutes behind the wheel.

The A-Star's front seats are very comfortable and designed for 6-footers. There's a good amount of shoulder, head and thigh support, and as long as you're seated in the front, long journeys will be fatigue-free. I like the steering wheel' position, it's mounted higher on the dashboard. There's no problems reading the speedo. The gear indicator sits neatly on the left. The operation of some of the levers and buttons are soft and sharp. The rear view mirrors provide a good view of the traffic behind. Overall visibility is good. While reversing however you'll have to put up with the small rear windshield and thick C-Pillar which don't help in the cause.

The steering is light and for city car standards, it's up there with the best. It helps to make amazingly quick turns. The brake pedal is larger than in the manual transmission car, so the extra surface area helps if you're wearing your size 10 jogging shoes. The brakes are a bit spongy Get used to it and they do their job very well.

The A-Star's strength is its engine. It's a 3-cylinder, 1-liter engine and at idling, to my surprise, it is smooth as silk. During normal operation, it doesn't fail to amaze even the toughest of critics. Rev it hard, it doesn't send out hard vibrations your way that other small capacity engines manage with ease. The engine is free-revving, and we've heard from many A-Star owners that its fuel efficient as well.

The sore point of this fantastic car has to be the automatic gearbox. I didn't go into the drive expecting it to be in the level of the Mercs or BMWs. I know this is a car built for economy and the fairer sex would use it for their trips to the mall. Having said that, the auto box is a boon in bumper-to-bumper city traffic. On the sparsely populated highways, it again is a blast to drive.

So what is it that I don't like about it? What about the rear seat comfort? How about the boot space? Top speed? Acceleration?

You'll have to wait until tomorrow for those answers, I'm afraid.