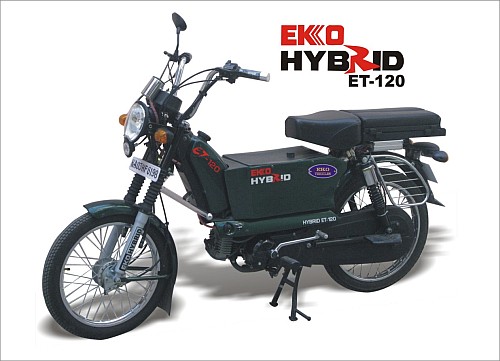 Many of you might have thought hybrid two-wheelers are a joke. For those of you, here's some serious proof that will make you eat your words.

The ET-120 uses a 70cc petrol engine and an electric motor to propel the wheels, which helps it return 120kmpl!

That is more than any Hero Honda, Bajaj or TVS.

The dual-power bike was possible thanks to a tie up between Eko and US based Emerging Vehicle Technologies. The vehicle can reach a top speed of 65kmph which is more than sufficient for crowded metros. The power and torque figures according to the company is that of a 120cc petrol engine.

We developed a hybrid technology which will allow the electric motor together with the gasoline motor or petrol motor to be in combination. So, they should get unlimited range. So, when you drive in gasoline, you are charging the motor

This wonder bike of 120cc capacity will halve carbon emission.

The ET-120 is priced at 40,000 rupees (roughly US $856) and that makes it the best electric vehicle you can buy in India today. Not exactly today since the bike goes on sale next year in the month of May.

Rumors of Mahindra's hybrid two-wheeler is starting to make sense after this development.