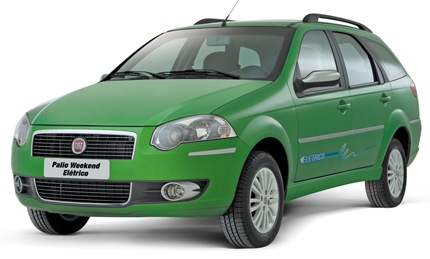 Last week, Fiat displayed the Fiat Palio Weekend Eletrico at Hall San Pablo 2008. Its development was created in conjunction with the hydro Itaipu and the Swiss company KWO. This car is predominantly developed for the Brazilian and European markets, but will soon spread to other markets.

The Fiat Palio Weekend Eletrico is run by a 20 HP Electric motor which is powered with a Nickel-Cd battery located in the lower part of the trunk, (Lithium-Ion can be used, but is very expensive). The expected range is 120 km. It has a gear lever with 3 operations : Drive, Neutral and Reverse. This car is not a hybrid, it’s a fully electric short distance city car.

As for the body shape, there has been a minor face-lift, it comes only in one color - green, and has small blue graphics on the doors. No news has been revealed so far about production and prices, but, we are quite sure that it will be launched in European region first, like Norway - where there is suitable infrastructure to support electric cars.

IAB Comment: The Fiat Palio Weekend Eletrico, we guess, is the world's first electric station-wagon. It somehow looks heavy, and we are not sure if a 20HP motor can do the job effectively. Apart from performance issues, we also reckon that this car will have a range lot lower than the quoted 120km. If it all works well, it will be a huge leap for Fiat and perhaps the entire Electric car industry. Also read our earlier post on Electric Tata Indica.