Back in the day we asked you a simple question: Should Fiesta Classic replace the Stone age Ikon? We got a few very interesting responses and most of them were affirmative. Ford India was also thinking on similar lines, and out-of-the-blue we heard the news that the Ikon will be discontinued and the Fiesta Classic is indeed the new entry level sedan from Ford’s stable.

Ford India somehow managed to reduce the price and launched the Fiesta Classic with a base price of Rs 5,49,000, an announcement which IAB brought you first along with plenty of images. 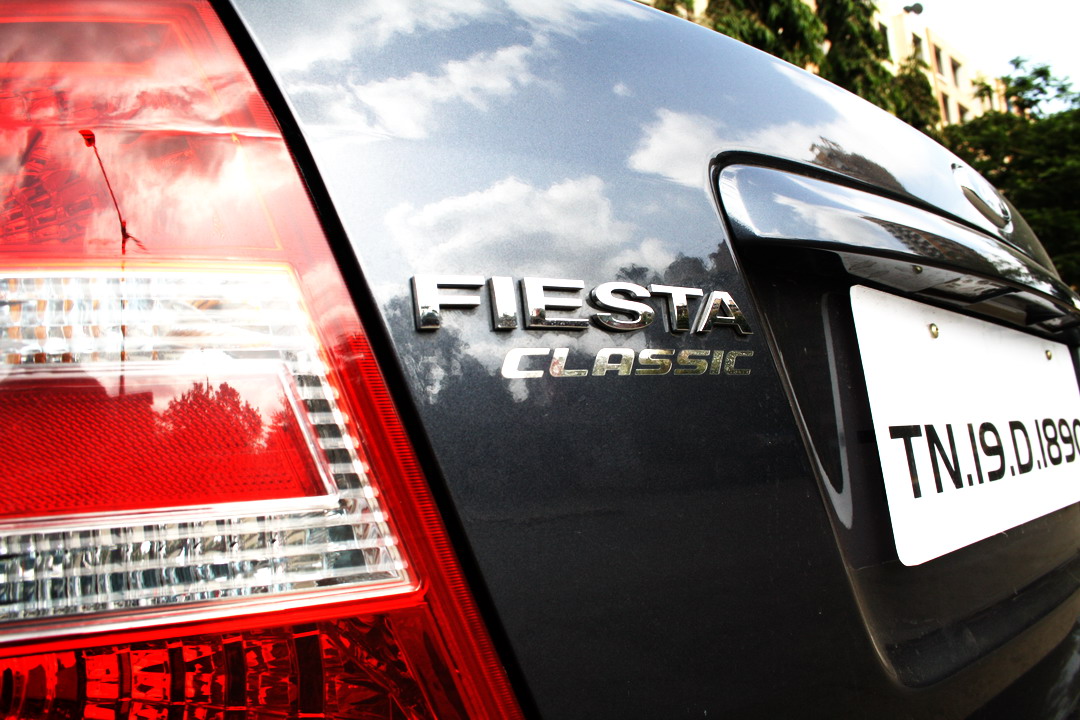 Clearly, our job was not done yet. We had to test drive the car to know what changes Ford has made to reduce the price. So grab a cup of coffee and start scrolling!

Why didn’t Ford discontinue the Fiesta?

The problem was the Ikon – Ford’s entry level model back then - was suffering massively in terms of sales figures. Its outdated platform and technology meant no one was willing to give it a second consideration. The international Fiesta was under testing in India and was all set for its official debut. But the current Fiesta was also showing strong sales figures.

Replacing the current Fiesta with the international would mean Ford would have to let go on substantial sales volumes. So instead they decided to downgrade the current Fiesta in such a way that it becomes the entry level sedan of Ford India’s portfolio. Ford will bring vehicles like Focus and Mondeo to India at a later date, so a facelift adding Kinetic Design touches could also be on the cards to keep it in tune with time.

That is because it is nothing but a normal Fiesta that has undergone an intense localization program to bring the price down. By leveraging on the suppliers that were selected for the Figo, Ford India has managed to bring down the price by a lakh of rupees on different variants.

Where has the cost-cutting occurred?

Has the cost-cutting affected the Fiesta as a product?

The Fiesta was always known for its driving dynamics (acceleration, braking and cornering) and sheer fun of driving. I am glad to say that Ford has kept that intrinsic nature of Fiesta intact. Everyone expected Ford India to drop a smaller engine in the car, cut the boot to bring down the price. But Ford continued the brilliant 1.6L Duratec Petrol and 1.4L TDCi Diesel engines and left the boot volume untouched.

So how it is to drive?

This car is such a hoot to drive that you tend to run short of words to describe the feeling. The 1.4L Diesel engine that we had produces 68 bhp @ 4000 rpm and that may not sound much but unbelievably it produces 160 Nm @ 2000 rpm and that is a lot for a car that weight only 1,150 kg!

Sure you get a petrol engine as well – the 1.6L Duratec to be precise. This engine produces 101 bhp @ 6500 rpm and 146nm of torque @ 3400 rpm and that is a hoot to drive as well. But with petrol prices touching 67 Rs per liter, it is a punching machine made specially for wallets.

The torque in the diesel is so low down the rev range that it instantly gets off the line and before you know it you are doing 80+ km/hr in no time. Very few cars under 10 lakh have this sort of acceleration. In its segment, it is definitely an Usain Bolt!

The outright grunt from the engine is matched with a superb suspension setup to make cornering fun. All you have to do is point the nose in the corner and the Fiesta just clings on until it touches the apex. The suspension is on a harder side to make sure that the feedback is adequate. This does compromise on the ride quality for the passengers but for the driver, it is just perfect!

The 175/65R14 MRF tyres do their job perfectly although there is an occasional squeal alerting you that you are pushing too hard.

Honestly, this car not being driven and just being parked in someone’s driveway is such a shame on the owner.

How is it being inside the car? 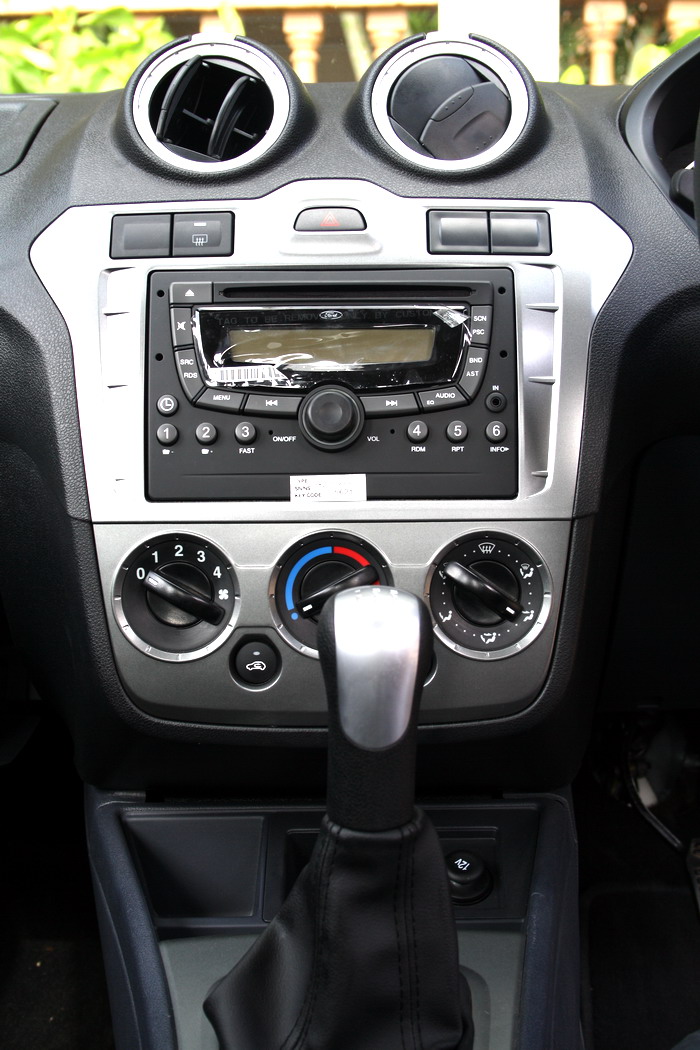 Step in the car and you realize that everything is big and chunky. The steering wheel, the gear stick and even the handbrake feel very masculine. You get a three spoke steering with perfect grip and a fat gear knob with some chrome garnish.

The center console, as I mentioned earlier, is lifted straight from the Figo. The focus has been on keeping the dash as simple and functional as possible. The few buttons on the center console are clearly demarcated with what they do. One wouldn’t call it as ‘stylish interior’ but everything is where it should be and everything works!

The quality of plastic used inside the car is below par but in the segment that it competes in, there are hardly any cars that boast of good quality interiors. The interiors may be made from low grade plastic but they certainly don’t feel flimsy. They are bolted together very well.

The problem is back seat. Back seat passenger will feel very cramped because there is not much space. The rival cars such as Mahindra Verito, Toyota Etios and Indigo Manza boast of a better back seat space than the Classic.

The pan-visibility is good. There are no odd pillars or silly design shapes that block your front or rear view. This makes parking very easy.

What about Fuel Economy?

We did about 500 kilometers on a half a tank of Diesel. This included equal proportion of highway cruising and city driving. According to our calculations, we got 22 km/L. Remember; these are real world figures with a lot of spirited driving involved.

How does it stack against competition?

The good thing about the Fiesta Classic is that unlike its competition, it has a distinct image – a spirited driver-oriented car. On a price to price basis, it competes against Mahindra Verito (a.k.a Logan), Maruti Swift Dzire, Hyundai Accent, Tata Indigo CS, HM Ambassador, Toyota Etios, etc.

The really strong contenders to the Ford Fiesta are the Toyota Etios and Swift Dzire. But none can match the sheer performance or thrill of driving the Fiesta. Period!

I have heard so many horror stories about Ford India on the Internet. Why should I buy it?

There is no denying the fact that there were many horror stories circulating on the Internet about Ford service stations. But things have changed leaps and bounds after the launch of the Figo.

Ford has finally recognized that it can’t afford to import expensive parts and has made considerable efforts in localizing its requirements. Localizing the parts has resulted in a better availability as well as a cheaper sourcing. There are hardly any horror stories about the Figo and we hope that the trend will continue with the Fiesta Classic as well.

The Ford Fiesta Classic proves that fun doesn’t have to be an expensive affair or on in a petrol car for that matter. With petrol prices sky rocketing, Fiesta Classic provides a brilliant alternative for the ‘driving oriented’ people among us who are running on a budget. By downsizing the segment of the Fiesta and making it cheaper, Ford has finally put a ‘Fun’ car in a rather dull segment.

Head over to our Facebook Page for some more pictures.