Maruti is gearing up to launch the 2015 Maruti Swift, and here are 12 changes we know for certain on India's most popular premium hatchback.

2. Diesel engine gets no power/torque changes

3. Fuel Efficiencies up by 10 percent

The top-end ZXi and ZDi variants get an intelligent keyfob (similar to the Ciaz's) with keyless entry and an engine starter button. The button, which is similar in design to the Ciaz's, is neatly located on the right-side of the steering. The mid- and top-end variants (V and Z grades) will get electrically adjustable and folding mirrors. This feature has always been present on the Swift's arch rival, the i20, and its high time Maruti introduced it on the Swift.

The Swift range will get a new LXi (O) variant. In addition to the features of the base LXi, it gets silver accents on the interior trims, front power windows with driver side auto-down function, central door locking, keyless entry and an alarm system. The LDi variant gets all the features of the LXi (O), and hence there is no LDi (O) trim.

The VDi trim of the 2015 Swift will come standard with ABS, EBD and brake assist. Sadly, the VXi trim still misses out on these features. 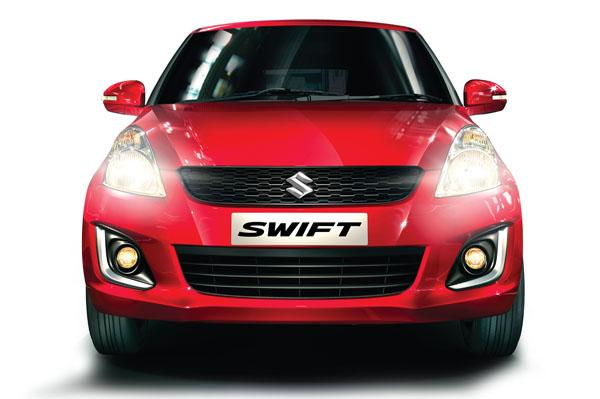 8. Silver Bezel for the foglights

The mid- and top-end variants of the Swift will get silver L-shaped bezels for the foglight enclosures, while on the lower LXi/LXi (O) and LDi, the bezels will be black.

The Swift will be offered in 3 new colors namely Fire Red, Granite Gray and Mysterious Violet. Other colors carried over from the previous model include the White, Silver and Grey shades.

Top-end variants get newly designed 12-spoke alloy wheels. The mid-end trims get new wheel caps of a different design to better distinguish themselves from the earlier model.