One day with the Tata Indica Vista 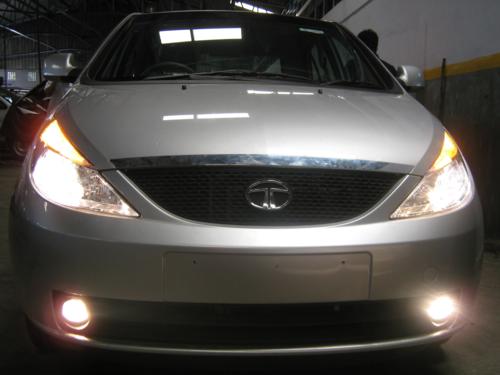 After my harrowing experience with the Tata Indigo DICOR, I decided to try other Tata products including the Sumo Grande and the Indica DICOR to see what else could make me giggle.

I'll speak about the Indica and Sumo some other time as what I commuted in today is nothing short of its mountain's king.

The Tata Indica Vista was my official car for the whole of today. When I waved good bye, close to a 100 kms was clocked on it, mostly through the expressways and the rest in the congested, confused and complicated Chennai city traffic.

We were the first ones to bring a full pictorial review of the Indica Vista to the internet. I remember that day vividly. Back then we were not allowed to take it out for a spin since the official launch was not done. It should have been a few days before the launch and that was enough to get us excited.

It was I and Harish Kumar (a.k.a. Harry) who experienced the truly jaw-dropping Tata. It was not an Indica in any aspect. Gaps were tightened, surfaces were softened, levers and knobs were fine-tuned and the steering wheel was not the diameter of a well anymore.

We had begun blogging back then. To see a car that was yet to be launched right in front of our eyes was not a daily event. We were carried away. We wrote the plastics were in reach of international standards. Yes, it was a stupid comment.

How was the Indica Vista today?

Believe it or not, I never knew I was driving a diesel variant until the accompanying person informed me after I complained about its slightly noisy character past the 3.5k RPM mark.

No, I'm not making this up.

With that said, let me split up the review into different parts so that we cover the basics.

Most of my in-cabin time was spent behind the wheel. The seats are not comfortable like the regular Indica. The head rest is useless, and the shoulder support is very average. The back and thigh supports were decent and the sitting posture is a big improvement over the old Indica. The engineers at Tata figured not all their customers learned driving in a Tata trailer and not all of them can stand back aches and knee sores for very long because not all of them went through army drills everyday morning.

I felt this side of the Indica's centre console was a big barricade to clutch operation. It was shaped to act like a support for the lower part of your leg, but sadly it is tapered off sharply. The clutch on the old Indica sometimes needed both legs for actuation, and this one though, is far better. It is smoother and does not make noises as you let it go.

The driving position is commanding. It gives you a good view of the road. I drove a variant which had height adjustable seats, so if you're a short person with tiny limbs, you'll make yourself comfortable.

The plastic quality on second inspection proved a touch disappointing. The guys have made a fantastic effort, but it could have been slightly better.

But what I found agonizing was the beige plastic's reflection on to the inside of the windshield. Driving in a road filled tree shadows, it was almost getting panicky. The reflection created false objects. The beige might look cool, but it certainly takes time getting used to. If you're windshield is dusty, it gets more challenging.

The central speedo+tacho position is a good idea. I was driving the Spark last week (which I will also talk about later) and I found it extremely hard to read the data. The Vista's big speedo and small tacho are easy on the eyes and wins my vote.

The placement of tiny aircon knobs under the stereo was a bad idea. I think aircon knobs need to be large. Every driver is going to end up using it. What is the point in making them small and tucking it under the audio console which isn't comparatively important?

And why are the A.C vents small? I remember sitting in the co-driver seat and no matter how I adjusted the A.C vent, the throw never was felt on my elbow.

The earlier Indica is certainly better in terms of cooling and ergonomics. Sorry.

Tatas are noisy just like how mangoes are sweet.

The engine is super silent. If you believe the mango-tata connection, you've got to drive the Vista for a day. You'll change your opinion and feel ashamed of yourself.

OK, this is a Fiat engine+gearbox setup, so what? It has been tuned beautifully. The engine isn't a torque monster and point-and-shoot type, but it still gathers steam and does 3-digit speeds effortlessly. The gear ratios are closer. The Indica DICOR had this rattle-and-wiggle 4th gear which would transform the cabin into a fruit mixer.

The Vista's gearbox is closely knit. You often end up shifting into 5th while doing 50 kph. The gear lever was chunky unlike the DICOR's knob whose pattern indicator had come off and the sharp edges were into identifying my blood group at every given chance.

The Vista's first two gears are positioned wisely. You use the first to get the car rolling and the second at crawling speeds. I sound like I haven't driven a car before, don't I?

Well, the Indica DICOR has two confused gears which at peak traffic hours prompted me to step out and manually move it around.

The engine is silent and fools you into thinking its petrol. Or electric.

I've driven the same engine in the Palio Stile and from the moment you fire up the engine, you'd know there is an oil burner a couple of feet away from you. The engine on the Stile was a bit untamed, it was a blast to drive and was capable of mind-whirling speeds.

This car is far superior to the Indica DICOR in the handling and suspension departments. The suspension is a little soft, but the engineers have worked around it to arrest excessive body roll, which I experienced on the earlier Indica. The ride is plush, thuds did make its way inside, but it was softer and very livable.

The steering is tight compared to the original. It certainly gives more feedback and made me feel confident at high speeds. It is also thicker and even oily hands will find ample friction.

The car's behavior during braking was very predictable. The wheels did lock up at times, but it is a terrific improvement over the old Indica.

The car's thick A-Pillar is part of the safety package. But if I knock down a cyclist everytime I take a U-turn, it isn't, right? The original Indica's A-Pillar was thinner and aided visibility.

I did not take the effort to record the fuel efficiency figure. Next time, during a more leisure drive, I will be able to comment on it.

Certainly a mammoth leap over the original Indica, the Vista is a winner to me. I've not put it against the Ritz or the Grande Punto, I'm only comparing it against its previous iteration, which is light years behind.

Improvements on the Vista is more than enough to keep me from complaining. I'm confident that is the case with other Indians too. But if this car lands in Europe, I'm not sure if I would prefer this car over Citroens, Renaults, Toyotas and Hondas. The whole car needs to scale a few more steps to be more competitive, especially the interiors and the ergonomics.

Safety devices is restricted to the 3-point seat belt and crumple zones, which is acceptable in India. Airbags, ESP, ABS and other items are certainly needed if it travels to the other side of the pond.

Tata's 3rd generation Indica is a car that I would want to drive. It promises a great deal. If they clock the same distance they have with the second generation model, it is going to be world class. No doubt.