The exterior is a commercialized Skoda VisionS.

The Skoda Kodiaq SUV broke cover in Berlin on September 1, raising the curtain on the Czech manufacturer's first ever three-row SUV. It was previewed by the Skoda VisionS concept car at the Geneva Motor Show last March.

Here's a brief pictorial comparison between the Kodiaq and VisionS. 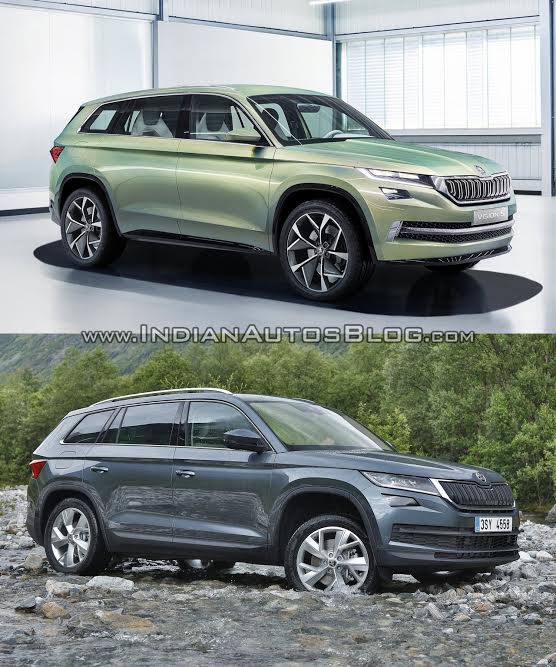 Looking at the two back-to-back, changes are limited to production-spec elements like conventional headlamps, rims, ORVMs and taillamps. The Kodiaq gets the plastic body cladding, but it lacks the large dual exhaust pipes from VisionS.

The exterior is an evolution of Skoda's design philosophy, with cues sure to trickle down to smaller models in the future. The Kodiaq measures 4,697 mm long, 1,882 mm wide, 1,667 mm tall and has a 2,791 mm wheelbase. Typical of any concept car, the interior of the Skoda VisionS comprises of displays, futuristic elements, and lacks buttons. As for the Kodiaq's interior, it builds on the Skoda Superb's layout, while drawing bits from the concept.

The Kodiaq has a useful boot volume of 720L (with third row folded), which can be increased to 2,065L with the second row folded.