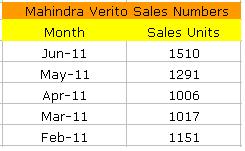 The Logan was the first (and sadly the only) product that came from the Mahindra-Renault Partnership. The Logan is a very successful B segment sedan in the some European markets and was brought to India with the hope that it would act as a cornerstone in the M&M-Renault partnership.

Unfortunately, the JV did not work out and Renault decided that it wants to part ways with Mahindra. As a result, there was a lot of uncertainty looming over the future of Logan.

But last year, M&M purchased all rights for producing the Logan in India and decided to enter in the sedan market alone for the first time.

On April 26th, Mahindra re-badged the Logan to Verito, gave it some cosmetic changes and launched it at a price point of Rs 4.82 - 5.62 lakh. We really didn’t expect much from the Verito but boy were we wrong. Since April, the stagnated sales numbers of the Verito have suddenly got a boost. Shown above are the sales figures of the Logan/Verito since February 2011.

That is a marked improvement considering all they had to do was add some chrome, roof rails, change the badges and formulate a new ad campaign. Now, the company is looking to expand the portfolio and is working on launching two new versions of the car by the end of this fiscal.

Dr Pawan Goenka, President of the Mahindra Automotive sector, told reporters that one variant will be a refreshed version and the other one will be a sub 4 meter Verito which will be cheaper because of the excise benefits.

While there are hardly any details of the refreshed version, the sub 4 meter Verito (Logan) was always in the pipeline. It will take on the Tata Indigo CS and the soon to be launched Dzire compact sedan.

Who knew a little bit of effective marketing could revive a dead product!