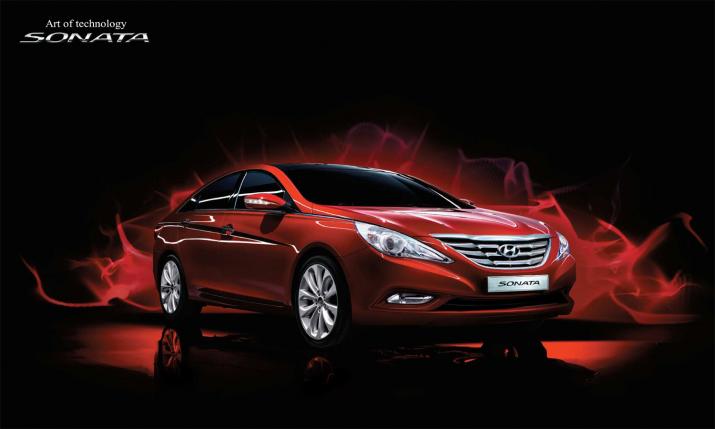 Hyundai, the world's 8th largest automaker has been very successful worldwide in the recent past. The latest 6th generation Sonata, which was launched recently has manged very strong sales worldwide. The latest Sonata YF has been designed based Hyundai's new 'fluidic sculpture' design language and looks fantastic.

Hyundai recently sold its 5 millionth Sonata. Hyundai launched the first generation Sonata way back in 1985 in the Korean market and the Sonata was launched in the international market only in its second generation in 1988. The largest market for the Sonata is Korea, where it is the country's bestselling car. The next biggest market for the Hyundai Sonata is the USA.

When Hyundai launched the Sonata in India last decade, the car managed decent sales and the Indian car buyer developed a liking for it. But competition in the form of the Accord and the Camry, later joined by the Superb dampened Hyundai India's hopes on the Sonata. The next gen Sonata Transform was an excellent car it also managed only average numbers.

We hope the latest generation Hyundai Sonata YF is hopefully given a favorable ecosystem in India. It has the potential to take over its plush looking Japanese rivals with looks and technology. Hyundai would be bringing the Sonata YF to India not anytime soon but in the distant future.

“The five million mark is a testament to Hyundai’s continuous quality improvement, technological advancement and differentiated design,” said Steve S. Yang, President and CEO of Hyundai Motor. “It’s Korea’s No. 1 sedan and now aims to be a game changer for the segment worldwide.”

Of the total, 2.7 million units were sold in Korea while 2.3 million were sold in overseas markets. The U.S. was the biggest market for Sonata outside Korea with 1.3 million cumulative sales. Sales of Sonata from overseas markets accounted for two-thirds of total sales this year, demonstrating the growing popularity of the latest version abroad.

Sonata is now entering its sixth generation since its launch in 1985, gaining steady popularity worldwide as Hyundai’s leading sedan and competing head to head against Toyota’s Camry and Honda’s Accord.

The U.S. launch of the fifth-generation Sonata started with the opening of the first U.S. assembly plant for Hyundai in May 2005. The Sonata earned broad recognition for its performance and quality, including being chosen as a “Best Bet” by The Car Book in 2006 and 2008. In 2007, Kiplinger’s Personal Finance named Sonata “Best in Class” in the annual buyer’s guide “Best of 2007 Cars” awards, while Sonata also received Autopacific’s 2009 Vehicle Satisfaction Award in the Premium Mid-size car segment.

The sixth and latest generation Sonata (Code name: YF), launched in September 2009 in Korea, adopts Hyundai’s new ‘Fluidic Sculpture’ design language and boasts outstanding performance with the powerful 2.4 Theta GDi engine. In the U.S., 21,195 units were sold in May alone, making it into the Top 10 best-sellers in the U.S. for a second month in a row.

The all-new Sonata is also receiving favourable reviews from leading automotive publications : It was the best model from Car and Driver’s mid-sized car comparison tests last April, and in May, Sonata was picked as the best mid-size sedan among eight in ‘The $25,000 Family Sedan Shootout’ co-organized by USA Today, Cars.com, and MotorWeek.