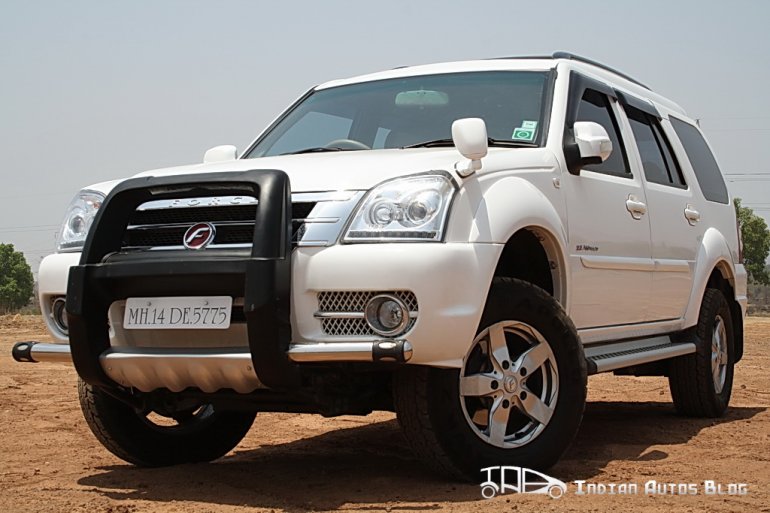 The Force One may be humongous to look at and has massive amounts of space inside. But how it drives is the real question that needs a definite answer. Remember that the Force One is the first passenger vehicle from Force Motors so the company has very limited experience of engineering a car for the Indian roads.

At the same time, its rival XUV500 derives its lineage from brand Mahindra&Mahindra which has a lot more experience in making cars fit of Indian consumers.

There are two key things that Force Motors marketed at the time of the launch of Force One. First was the Daimler engine and second was the Lotus enhanced handling. But do these claims hold any water? Let’s find out:

What powers the Force One? The Force One is powered by a Mercedes-Benz’s 2.2-litre OM611 common-rail engine which produces 141PS and 321NM of torque. Twist the key, and the Force One shakes to life in a typical diesel engine fashion. The engine settles down very quickly. While idling, very few vibrations are transferred to the cabin.

But if you are standing outside and someone starts the car, you will realize that there is nothing remotely Mercedes-ish about it. It is quite a noisy engine.

Let me start off with some good points of the engine. The Force One’s engine is very torquey. Though it is turbocharged, the meat of the output starts right from 1,600 rpm and it keeps pulling all the way to 4,500 rpm. There is no outright turbo kick but there is certainly a smooth flow of torque. The constant flow of torque makes it very easy to overtake on the highway. Unlike Premier Auto’s Rio, the Force One comes with a BSIV complaint engine which means it can be sold in metros.

Now for the bad stuff. The engine is very noisy and is not free revving. It takes effort to push this engine into the useful rev band and keep it there. Moreover, the overall feel of the engine is very crude.

But by far the most disappointing part of the Force One is the G32 five-speed manual gearbox which is appalling. The throw is long and the gear changes are not very smooth or precise. The gates are wide which results in a lot of gear grinding. The gears have a tendency to pop out if they are not slotted correctly. It ruins the whole experience of driving this beast. The clutch is also very heavy to operate. How does the Force One handle?

The ride is softly sprung which means that unless there are at least 5-6 sitting inside weighing the car down, you are going to bounce around as the road undulates. The ride is not compliant and is slightly on the rough side. The ample body roll is something Force Motors needs to fix. The huge ground clearance however is a blessing on Indian roads.

The steering is a hydraulic unit and is not as razor sharp. But then again, it’s a two tonne car were are talking about. The Apollo Hawks all-terrain tyres are kind of a trade of between off-road tyres and on-road tyres. The result is there is an evident rustling sound when you are on smooth tarmac. However, don’t expect the Force One to easily make any sudden lane changes.

The brakes lack feel. Adding to that the omission of ABS on such a heavy car makes hard braking a bit nerve wrecking.

One good thing about the Force One is its good seating position which gives a commanding view and all round visibility when driving. Very few blind spots to take care off. What about fuel economy?

You will love this. After a hard day of bashing the Force One, it still managed to give us 13 kmpl. That’s nearly a petrol hatchback mileage figures from what is essentially an enormous  SUV. Frugal indeed!

Unfortunately, the Force One does not even come with ABS or Airbags, forgets TCS or ESP. But the company is working on ABS and Airbags and they should be out by the end of this year. The Force One is a decent first attempt by Force Motors. It is VERY difficult to get the car right in the first try. The first generation M&M Scorpio was similarly (if not more) crude and unrefined. But now the current generation Scorpio feels much better to drive than the older ones.

The difference with Mahindra kept improving the Scorpio piece by piece over the last ten years. The Force One is not finished yet. It has a long way of development to walk. We hope Force Motors keeps updating the Force One depending on the customer feedback and market expectations.