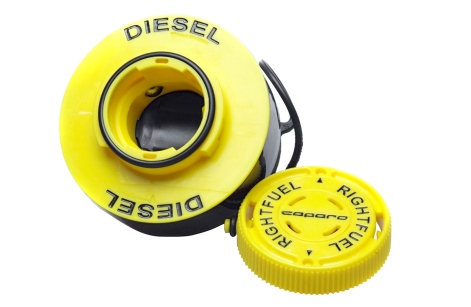 A friend of mine has been in this circumstance before. He filled his diesel car with petrol, and it struck him only after he drove a few kilometers.

Filling a diesel car with petrol is dangerous. It won't lead to an eruption or fire, but is threatening to that wallet sitting innocently in your back pocket. Thousands of rupees go waste due to inattentiveness. We could have a lot of things to bother about when stopping at the pump, and that results in such a mistake.

Caparo, a firm that makes everything from the Bugatti Veyron-shattering T1 super sports car to components for the Tata Nano has devised a smart and cheap strategy to keep motorists in the U.K away from incorrect fueling.

It is a cap which replaces the standard fuel cap. Due to its smaller diameter, the larger petrol fuel nozzle won't fit in it. It costs thirty pounds and has the potential of saving thousands of pounds from going to the service station.

Check out the PR to learn more.