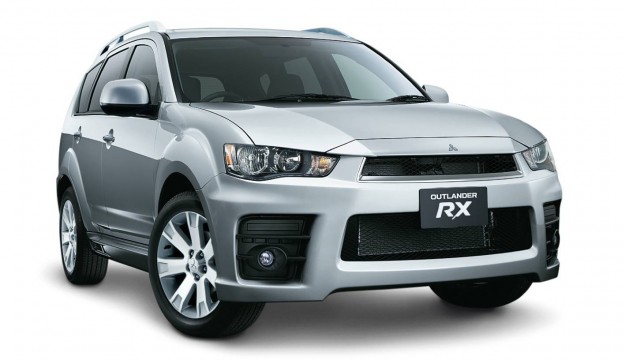 Mitsubishi has always ignored the Indian market never taking it seriously.One of the reasons has been its partner-Hindustan Motors. They have been slow in launching products, their marketing is lousy and they do not have proper service backup.

Mitsubishi has ambitious plans for 2010.The aging lancer and Pajero have been phased out from BS-IV compliant cities. The Outlander has a got a new life with a completely new look, added features and a lower price tag. Expect this to be officially launched later this month. Also on cards is a diesel Outlander.

This one gets a 2.0 litre diesel engine with a power output of 138 BHP and 310NM of torque. Transmissions include a 6 speed manual & 6 speed Auto. Expect this to hit Indian shores around Diwali. Mitsubishi is also working out to launch a stripped down version of the Outlander with 2wd and is working on heavy localization for it.

Next up is the Pajero sports which is an outright off roader worthy for the tag of an SUV. Powered by a 3.2litre diesel engine with a power output of 165 BHP & 351NM of torque mated to a 5 speed manual or 4 speed auto, this will doubtlessly be a good rival to the Fortuner and will be locally assembled.

The Pajero sports will be priced around 20 lakh rupees and is expected to be launched in June.Mitsubishi will also at last get the new lancer to take on the Civic,Corolla, Cruze & Laura. Powered by a 2.0litre 152 BHP petrol engine & a VW sourced 2.o diesel with a power output of 138BHP, the car is expected to be priced between 11-13lakhs.

Transmission includes a 5 speed manual & a 6 speed automatic.Expected launch-mid 2010.The EVO X is also expected hit Indian shores by the middle of this year. If rumors are to be believed the car has completed homologation at ARAI.

Powered by a 2.0 supercharged petrol engine with an output of 300BHP mated to a 5/6 speed manual, the EVO is expected to be priced around 35 lakhs as it is going to be imported as a CBU. Let us also not forget the new Lancer was caught testing a while back in Kolkata.

However, the company turned down all reports on bringing a small car to India. Mitsubishi sure is on the right track with all these products, but is HM ready?

The CEO of HM recently quit the company which indicate troubled times ahead.Will Mitsubishi be able to pull it through? We really hope so!