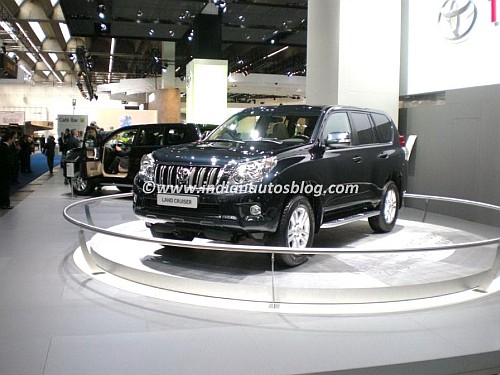 Toyota will launch the refreshed Land Cruiser Prado tomorrow in India. While we can't confirm if Toyota will include the 3.0-liter D-4D diesel engine to the Prado, we certainly can't rule out the possibility since the company has spoken about it before. The engine will be listed, but will it happen tomorrow?

We're heading to the launch to find this out. We'll also ask Toyota about their small car and plans they have for the Auto Expo. So come back tomorrow to learn about it.

The new Toyota Land Cruiser Prado was unveiled at Frankfurt in the second half of 2009.

A ground breaking feature on the Prado is the Multi-terrain Select, which automatically controls power and braking according to the off-road surface, while providing you live video feeds through the four cameras placed around the car.

The Prado is expected to be priced around 40-50 lakh rupees. Be sure to check Indian Autos Blog tomorrow for more information.