What a big day it was for the Force Motors as they took the wraps of their first Premium passenger vehicle – Force One. In its testing phase, the Force one was the most photogenic SUV in India. We even got you spy pics from the northern mountains where this SUV was put to test on high altitudes. 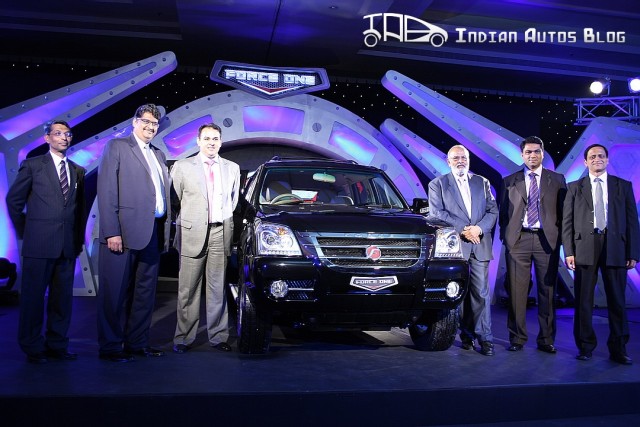 Photograph - A proud Force Motors Team with their baby

The Force One signifies an important step in Force Motors’s future. It is the first step taken by a commercial vehicle manufacturer into the passenger car segment. Previously, Mahindra&Mahindra and Tata Motors have taken this step and now they are red-lining the Indian Automotive scene.

So will Force One establish Force Motors as an important manufacturer in India? Let’s find out.

The Force One has been under testing for years now. There were a total of 15 prototypes that were tested for 7,00,000 kilometers in very stressful conditions. The outcome was finally unveiled to the automotive press on Friday and we brought you all the details from the press conference LIVE as promised.

So what does the Force One offer?

Before the SUV was launched, there were many rumors of it being linked to the Foday Explorer from China. Although the SUV still slightly resembles the Foday Explorer, but the similarities are NOT blinding obvious.

Design wise, the Force One is somewhat similar to the current Ford Endeavour. You get a very long nose which is highly elevated from the ground and a stretched body which maximizes interior space.

The front of the Force One features a typical SUV design with a long bonnet and huge headlamps to give it a masculine stance. The front features dual projector headlamps with LEDs and a flashy chrome grill to give it a premium appeal.

These distinct front characteristics makes it a more premium product than the Foday Explorer which seems very utilitarian. You can also notice the skid plates at the bottom to protect the internals if you choose to go off road.

Coming to the side, you will notice that this is not a compact SUV like the Scorpio but rather a full-size, stretched one like the Ford Endeavour. The Force One rides on 16 inch 5 spoke alloy wheels with 235/70 R16 tubeless tyres.

You also get aluminum side step for climbing into the SUV because the vehicle sits quite high from the ground.

Notice the roof rails which give this SUV an outdoorsy, off roadish looks. Force One also gets a rear spoiler as an added design feature.

From the rear profile, the Force One looks like a very standardized product that can be easily lost in the parking lot. The spare wheel is not attached to the rear door but is rather placed underneath the body. The aluminum steps are also present behind. The dual exhaust on one side give it a slight touch of creativity.

Overall, the Force One does look like a car that someone would like to own rather than a bland commercial vehicle. It is a very significant achievement for a manufacturer that was making commercial vehicles for many decades.

The slight touches here and there add on to the complete design of the SUV separating it significantly from the Foday Explorer.

Step inside the Force One and you will notice that this SUV has (and I use this word very rarely) class leading space. It has more legroom in the third row than the Toyota Innova which is a pleasant surprise.

But the problem is that it has less head room so your legs are very comfortable but your head touches the ceiling. Thus the rear seats are only restricted to kids.

The dashboard feels a bit outdated with the fake wood and poor quality of materials used. The aftermarket JVC stereo unit further dampens the experience. But then again, the Force One is the first product from the company so most components will be outsourced because the company has little or no experience developing personal vehicle components with suppliers.

Many of the soft components come in from Thailand and China.

The leather wrapped, multi-control sporting steering wheel with a huge Force One logo is a pleasant surprise. The brushed aluminum buttons on the steering wheel makes you feel that the designers were very much inspired by the Range Rover. A lot of information is presented in between the dial cluster along with a digital temperature gauge.

The leather seats are very comfortable. Each row gets a dedicated AC vents and even the third row has reclining seats. The middle and the third row fold flat to give you more luggage space.

A distinct feature in this SUV is that even when the third row seats are up there is huge amount of boot space in the rear. Ingress and egress in the SUV is a bit problematic because it rides very high above the ground. It is even more problematic to get into the third row seats because the back rest of the middle row doesn’t fold flat.

For now, the Force One doesn’t get ABS or Airbags but it does get Cruise Control and Rear parking sensors. Airbags and ABS will come in another variant later on.

It is mated to a 5 speed gearbox (again from Daimler) but the drive only goes to the rear. Yes, this is only 4X2 SUV but a 4x4 variant will follow in March 2012. This 4X4 will have selectable drive on the fly and it will not have a low ratio gearbox.

The suspension of the Force One is fine tuned by Lotus so expect some good action from this SUV. The front gets an independent double wishbone with coil springs and the rear gets a multi-link set up with coil spring. We will surely bring you a report on how it drives very soon.

For now the Force is available in only one variant with 5 color choices – White, Black Red, Grey and Blue. At a price of 10.65L ex Mumbai, the Force One fights against Scorpio and the soon-to-be launched Tata Safari Merlin.

To sum it up, it is surprisingly a very honest and decent first attempt by someone who is entering the passenger space for the first time. Sure there are a few quality and design issues but Rome wasn’t built in a day.

Hopefully, Force Motors will learn the market very soon. However a task of selling 4,000 units by year end with just 22 dealerships at hand is very daunting.

Do you think the Force One will make a considerable dent in the SUV segment?