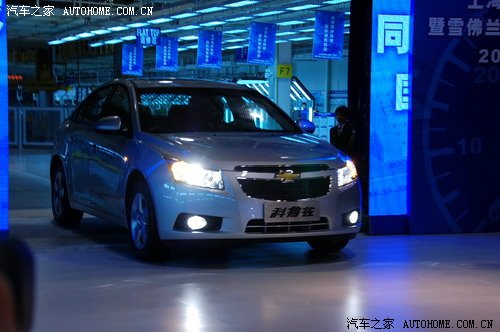 The Chevrolet Cruze viz. one of GM’s world cars, and will see production in several parts of the globe in 2009, including India . SAIC-GM (a Chinese collaboration) has started the production of the Cruze in its Shenyang factory, with the first fully assembled test model rolling off the line. GM showed off the first production model to the Chinese press, with reportedly many from the GM management on sight to celebrate the first models production. Work on GM’s Shenyang factory began in 2005, and was completed within 3 years, the factories main focus is on higher quality, and ‘green production’, the factory lies on 136,000 sq meteres of land, and 26.7 billion RMB has been invested in its construction, making it one of the largest GM factories in China, with a production capacity of 150,000 cars per year.

The Chevrolet Cruze is expected to be formally put into production only in the second quarter of 2009, and be on the market shortly afterwards. The North American markets are expected to receive a 1.4 turbo engine, European models are set to receive a 1.6l, and 1.8l gasoline engines, as well as a 2.0l diesel engine. Indian Cruze still remains a mystery except for its tentative launch in Dec 2009.

How far behind is India ?