Chevrolet Sonic unveiled; Is it heading to India?

The Aveo sedan, dubbed as Chevrolet Sonic for the North American market, has been revealed in the form of images and details. The Spark-inspired cockpit and spacious rear seat are features we expected to see on the 6-8 lakh rupee sedan. 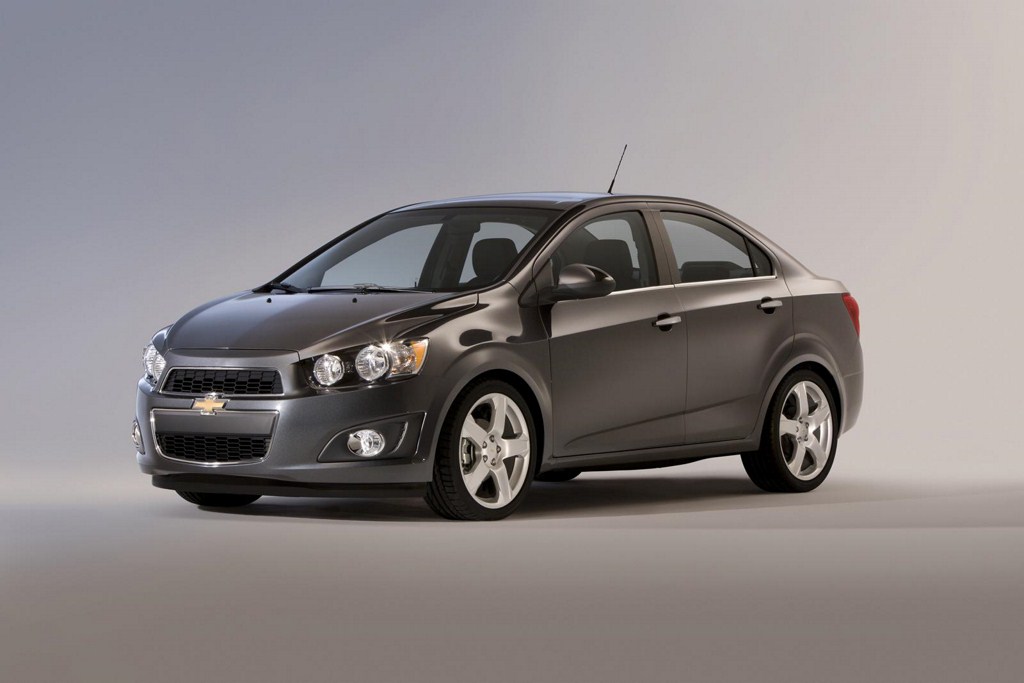 During the launch of the Beat in January 2010, GM India told IAB that the new Aveo (we know now as Sonic), in its sedan form, will arrive in India first in 2011. However with the emergence of the Sail sedan from SAIC, GM India could postpone the launch of the Aveo sedan and the hatch could be delayed further. The Sonic, whenever it comes to India, will operate using Fiat's 1.3-liter Multi-jet diesel engine. Ecotec petrol engines could complete the line-up, the displacement should range from 1.4-1.6 liters. Currently, the Indian Aveo uses a 1.4-liter engine that runs on gasoline and CNG.

General Motors is most likely to offer USB/Bluetooth connectivity, remote start, ten airbags, antilock brakes, electronic brake force distribution, flat folding rear seats and sunroof on the US-spec model, some of which is suitable for India. A five-speed manual is the best bet all engines, while a six-speed automatic, on the menu for America, might not be offered on the Indian Aveo. GM India believes the shift from manual to automatic transmissions will happen in India and at its Powertrain center in Bangalore, engineers are working on gearboxes for several applications. A low cost automatic transmission might find a place under both the Sonic and the Beat. Chevrolet Sonic has a MacPherson strut front suspension (with stabilizer bar) and a semi-independent torsion beam rear. Electronic power steering will be offered. General Motors will only offer drum brakes at the rear wheels. The Sonic is offered in two body styles: a stylish four-door sedan and a sporty five-door. Each delivers class-leading rear-seat roominess and cargo space. A variety of connectivity features enhance the driving experience. "The all-new Chevrolet Sonic blends the practicality of a small car with the passion for driving that Chevrolet vehicles like the Corvette are known for," said Chris Perry, vice president of Chevrolet marketing. "Its combination of great design, fun driving experience and the latest connectivity features create a serious competitor with a fun spirit."

Production of the Sonic begins later in 2011 at the General Motors Orion Assembly Center in Michigan, which received a $545-million investment in upgrades and retooling, and will help restore approximately 1,000 jobs in the metropolitan Detroit area. 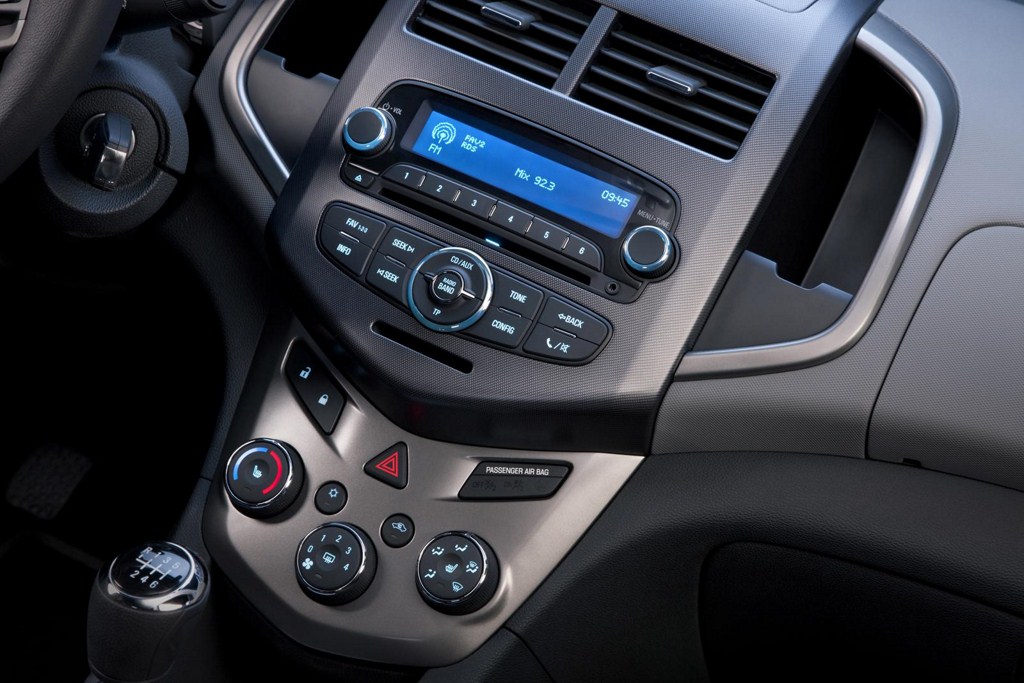 "Chevrolet is the only company building a small car in the United States," said Perry. "We believe the Sonic will bring substance to the segment, with progressive styling, performance and value that will change perceptions of what a small car can be in America." Aggressive cues, including fender flares and motorcycle-inspired round headlamps, are blended with global design cues - a dual-element grille and round taillamps - for a design instantly recognizable as Chevrolet. The leading edge of the hood forms a character line above the headlamps, which flows in a sleek side profile characterized by uninterrupted body side lines, a high beltline and low roofline. The side mirrors carry the same shape as the car and seemingly disappear into the profile.

The sedan and five-door models are distinctively different. The five-door carries a tight, two-box shape with aggressive, diving feature lines, while the sedan's "notchback" profile has a more upscale and mature presence. At first glance, the five-door model looks like a three-door hatch because the rear door handles are discreetly located in the "C"-pillar area. The rear of the five-door continues with unconventional details, including exposed, motorcycle-inspired rear taillamps.

Details that reinforce Sonic's quality and attention to detail include chrome grille surrounds and matte black honeycomb grille inserts on all models, while a range of large wheel sizes, including 17-inch alloy wheels, reinforces its sporty demeanor.

Sonic's cabin complements the motorcycle-inspired exterior with a detailed instrument cluster featuring a large, round analog tachometer set within an asymmetrical LCD readout, with a large digital speedometer display.

* The mid-instrument panel surface is available in two colors (dark titanium and brick) and flows seamlessly into the upper doors, with premium low-glass finishes
* The automatic shift knob has a "cobra head" design," while the manual shifter has a chrome-finished knob
* Tubular outboard climate outlets protrude from the instrument panel surface.
* The interior includes storage compartments in the center stack and doors. The rear seats fold flat for carrying larger items. Front bucket seats are standard and heated front seats are available.

The Ecotec 1.4L turbo's power ratings are estimated at 138 horsepower (103 kW) and 148 lb.-ft. of torque (200 Nm) between 1,850 rpm and 4,900 rpm. The wide rpm range for the maximum torque - a specific trait of turbocharged engines - helps the engine deliver a better driving experience and performance. Premium design elements give the engine world-class smoothness and durability. Features include:

The 1.4L's turbocharger is integrated within the exhaust manifold, for reduced weight and greater packaging flexibility in small vehicles. A reinforced crankshaft and stronger connecting rods deliver additional strength to support the engine's pressurized power and torque over a wide rpm band.

The naturally aspirated Ecotec 1.8L engine has many of the same features of the Ecotec 1.4L turbo. It is a compact and durable four-cylinder engine designed for low maintenance, low emissions and fuel efficiency. Its two-stage variable intake manifold allows approximately 90 percent of peak torque to be available from 2,400 rpm to 6,500 rpm. It is estimated at 135 horsepower (101 kW), along with 123 lb.-ft. of torque (167 Nm) at 3,800 rpm.

The Sonic brings agility and a fun-to-drive feel that is rare in the segment. Engineers who also work on the Corvette tuned the Sonic's confident ride and handling, giving it a more direct and athletic feel, while balancing the vehicle for the broad range of driving conditions in North America.

Electronic power steering is standard and features a wear compensator that continually adjusts the system interaction with the steering gear to ensure precise steering action over the life of the system.

Sonic's body structure is designed to be one of the stiffest in the segment. Its rigidity enabled engineers to tune the ride and handling more precisely. Sonic's unique "flat top frame" cradle, for example, assures optimal stiffness in the front chassis portion of the vehicle. The rear axle is essentially a straight axle without contour for packaging restraints and reduced noise, vibration and harshness.

A range of wheel sizes is available, including 17-inch wheels and sport tires. Power-assisted front disc and rear drum brakes are standard, along with a four-channel antilock braking system. The four-sensor system - one at each wheel - incorporates electronic brake force distribution, which balances braking performance based on such factors as road conditions and the weight of passengers and/or cargo.