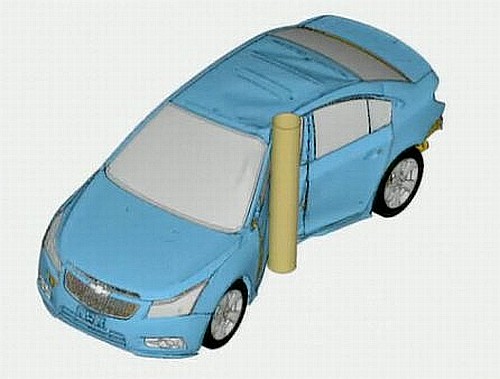 Engineers developing cars are always used to their company's financial arm dictating the outcome of the product. So to allow this, engineers would have to make some compromises on their product.

Anything can be compromised in a car, but safety. So engineers invent newer and economical ways to make sure that their cars have high safety standards. This is exactly what the engineers at General Motors have done for the Chevrolet Cruze.

The Chevrolet Cruze has been developed with the help of elaborate computer crash simulations. Crash simulations are 'extreme' computer programs which simulate the deformation and impact forces on the vehicle when a car crashes. The engineers use a crash simulation program to study the results of a crash and using the data to correct or re-engineer the model before the final prototype is built.

With the help of crash simulations, a countless important tests can be run on a single vehicle without even a scratch on the vehicle.

The crash simulation super-computer has the processing power of 35,000 laptops and uses finite element analysis and complex mathematical formula to recreate real world crashes.  Crash simulations are becoming increasingly popular with automobile manufacturers because they are both economical and time-saving.

A real live crash test is an expensive affair. One hundred crash simulations can be performed in the time it takes to run one live crash, which results in quicker product development. Moreover, the results of a crash simulation can be very detailed and data about the crash can be collected at every micro-second of the simulated crash.

Years ago, to develop a car like the Chevrolet Cruze, engineers would have crash tested at least a hundred cars, but now with computer simulations, all the crashes are simulated and only a few live crashes are performed to validate the computer's results and to pass the Government's safety tests.

Thanks to technologies like this, new cars are becoming safer every day. This doesn't mean drivers can drive irresponsibly just because their cars are designed to withstand impacts. Driving safe is the biggest safety feature in a car.