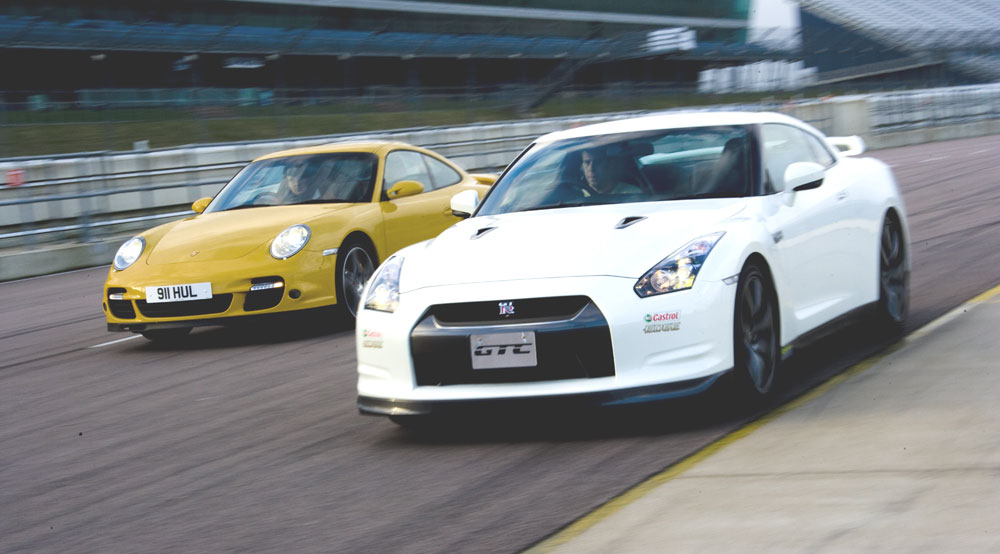 In a radical reply to Porsche's allegations that the Nissan GT-R is actually slower than the 911 and the 911 GT2, Nissan has given a detailed reply. You can read the article about Porsche's allegations here. Nissan has offered to show pictures of the GT-R and its tyres that clocked 7min 29sec at the 'Ring. Nissan is standing firm on its claim to the production car lap record at the Nurburgring despite a blistering attack from Porsche.

The German sports car maker accused Nissan of using special semi-race tyres when it set the Nurburgring benchmark at 7 minutes 29 seconds in April but the Japanese company is now going public with the actual Dunlop SP Sport 600 DSST CTT tyres used for the hot lap.

It is also offering video footage shot by the Japanese magazine 'Best Motoring" during the high-speed runs.

Nissan has also questioned the preparation of the customer GT-R used by Porsche for its in-house testing last month, where it claimed it could not get within 25 seconds of the Nissan time and that its 911 GT2 and Turbo were both quicker.

And, in a back-handed slap at Porsche, it has offered driving tips for anyone trying to get the best from a GT-R.

The man who led development of the Nissan supercar, chief engineer, Kazutoshi Mizuno, says the lap record car is a regular production GT-R.

“Testing a car with specialized parts such as unique tires or suspension has no meaning for us. The GT-R was designed from the start to be a supercar that could be driven anywhere, anytime and by anyone. For us, testing the car in standard production specification is far more relevant than creating a one-off vehicle that our customers cannot buy," Mizuno says.

Nissan has taken nearly a week to assemble the evidence it says clearly refutes the Porsche claims.

It has even offered to show the actual tyres from the record run, which were taken back by Sumitomo in Japan for promotional work, to prove they are identical to the rubber fitted to production cars.

Read on for more

"It is clear that there are some important facts that were not accurately represented," Nissan says in its official press release on the Porsche claims.

It states that the record run, by former F1 driver Toshio Suzuki, was even compromised by carrying around 50 kilograms of data logging equipment supplied by Marelli and camera equipment.

Without attacking Porsche directly, it has also questioned everything from the tyres on the customer car its rival used to its preparation and the skill of the driver - who Porsche describes as one of its chassis test engineers.

Nissan says there are two types of tyre fitted to the GT-R, and the clear inference from its reference to the Bridgestone Potenza RE070R is that these were fitted to the Porsche-run GT-R and not as quick on a track as the Dunlops it uses.

It has also indirectly questioned the preparation of Porsche's car by referring to the run-in and service procedure, as well as the special technique for driving the all-wheel drive supercar.

"We are aware that several auto makers have purchased the GT-R for their own testing and evaluation. Like all GT-R customers, we recommend that any auto maker buying a GT-R should follow the recommended run-in procedures, service schedules and maintenance to ensure the maximum performance from their car," Nissan says.

"In addition, we offer performance driving courses for prospective and current GT-R owners to help them get the best performance from their car. We would welcome the opportunity to help any auto manufacturer with understanding the full capabilities of the GT-R."

Nissan has gone into great detail on its work with the GT-R at the Nurburgring, including documenting its various track tests earlier this year and the method - the same one used by Sport Auto Magazine in Germany - it used to time the car.

And Mizuno even says the Nurburgring lap record was not the prime objective of the GT-R program.

“We have used circuits like the Nurburgring and Sendai extensively during the development of the GT-R. The fastest lap-time was never the objective but a simple parameter for us to measure the GT-R in a consistent way against other world class supercars," he says.