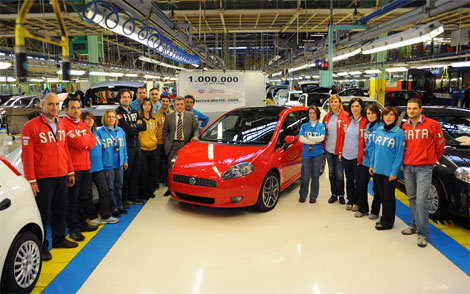 The one millionth Fiat Grande Punto rolled out Fiat's Melfi factory in Italy, a couple of days back. The Grande Punto has changed the face of Fiat after the brand almost went bankrupt before the car's launch.

Launched in 2005, the Grande Punto is the 3rd-generation Punto and is significantly larger than its predecessors. Almost 6.5 million of the Punto series have been sold since it's launch in 1993. This car, according to sources, will be manufactured in India starting February 2009.

When launched in India, the Grande Punto would be a premium B segment hatchback powered with a range of FIRE petrols and Multijet diesels. The stunning sporty look with a bunch of practical features of design, comfort, safety, style and spaciousness should go down well with the value-conscious Indian customer.  In International markets, the Grande Punto competes with cars like the Renault Clio III and Toyota Yaris, the latter among the future products for Indian market.

The Multijet turbodiesel engines which occupy the Grande Punto's hood are jewels of modern engineering offering mileage and performance simultaneously. The Suzuki Swift, Indica Vista and Fiat's own Palio, use the Multijet engine which won the International Engine of the Year award for the year 2005, which conform to Euro 4 emissions standards.

Neat, plain styling and fashionable Italian image; the Multijet diesel engine; five-star NCAP crash test score; fun to drive; are few of the reasons why you should buy the Fiat Grande Punto. One million customers couldn't be wrong, can they?

Today the millionth Grande Punto came off the production lines at the Fiat factory in Melfi. This model was launched in 2005 and was the heir of two best-sellers: the first Punto (from 1993 to 1999) of which 3.5 million were manufactured, while the second series (launched in 1999 and currently on sale under the name Punto Classic) exceeded 3 million.

Intended for the British market, the millionth Grande Punto is a Passionate Red Sport version equipped with the spirited 1.4 turbo petrol 120 bhp engine. The car’s distinguishing characteristics are its large “Skydome” electric roof, 17” diamond-cut alloy wheels and chrome rear view mirrors. These last two features confirm the great attention given to accessories and aesthetic details introduced with the 2008 range.

Always a huge star on all the international markets, the Grande Punto MY 2008 has recently had a make-over with the adoption of major features aimed especially at the younger public. Just think that the sports line (Sport and Racing) accounts for 25% of total sales, while 14% of these customers choose to customise their cars with original stickers. Not only, currently 30% of Grande Punto customers demand Blue&Me, the system that has changed the paradigms of communication, information and in-car personal entertainment.

Moreover, aware of the comfort and safety features of the upper segment, 40% of customers choose the Dynamic version. Finally, for a few weeks now the dual fuel (petrol/methane) Grande Punto has been on sale, expanding the Natural Power range currently comprising the Panda, Multipla, Doblò and Punto Classic models. It is an important point that 24% of total sales of the Grande Punto are actually of the new methane version. The Grande Punto Natural Power is the ideal answer for those who want an environmentally-friendly car which is also economical with low fuel consumption. All this combined with excellent performance, extraordinary versatility and maximum safety levels.