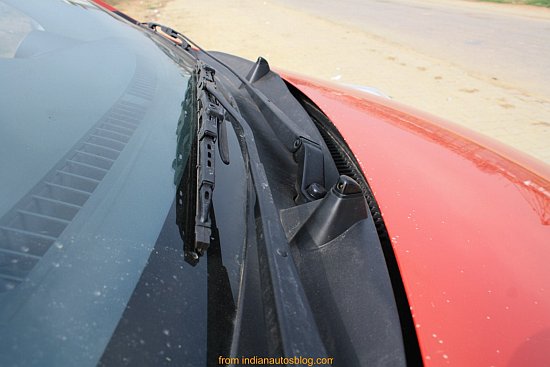 A windshield wiper is a device which moves a rubber blade back and forth to clean the windshield, operated electrically.

In the early years, the windshield wiper was actuated by vacuum or by compressed air to remove rain water, moisture, dead insects and dirt from the windshield.

The Tata Nano isn't the first car to come with a single windshield wiper. Mercedes Benz invented a windshield wiper system termed as "monoblade" where a single wiper could do the job of two. The wiper arm was built so that during the sweeping action, it would extend as it went closer to the top and retract as it reached the bottom.

In several cars, smaller wipers were used to clean the headlights ! These days you don't see them.

The wiper blade is fastened to the arm in six to eight places so that even during fast action, it doesn't come off. Modern cars switch on their wipers automatically when they sense rain. A hygroscopic material (which balloons with water contact and switches on the wiper) served the purpose until recently when a optical sensor came about, which was better in every way and needed little or no maintenance.

Compressed air wipers were the most annoying ones since they relied on the manifold (a component of the engine) pressure for their operation. During idling or low speeds, the pressure is less and the wiper worked slowly. At high speed, the wiper worked faster.