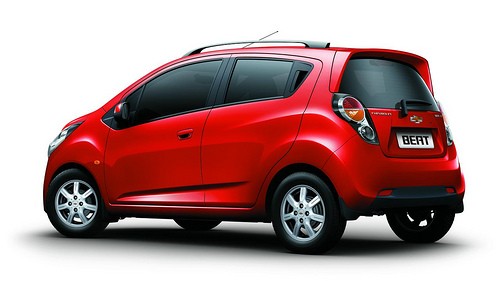 The Chevrolet Beat's face is inspired from a Cheetah's. Not sure if the designer was viewing Wild Discovery while drafting this car, but the entire design from bumper to bumper is packed with cuts, curves and bends. The design is inspired from a moving cheetah, I'd say. A cheetah moving in for the kill.

Though the Cheetah face isn't very evident, what is is its close resemblance to the concept car. GM's design team did not go beyond the first draft while freezing the production model's design. They stuck to the pull back headlamps, rising window line and muscular wheel arches.

For once I can say loudly that not all car manufacturers bring imaginary cars to auto shows. The real world now has a foreigner arriving from that location.

How does it stand apart in the most crowded segment in the country, where almost 70% of cars sold are hatchbacks?

The country in which the hatchbacks grow at the rate of growth in economy and population, it has to be really different and radical to stand apart from the crowd and that’s what this Chevy does well. It’s sexy, loud and radical, the design stands apart from the conventional looking hatchbacks and it would be more appealing to your wife or girlfriend than say your father or uncle.

The huge head lamps which is as long as the bonnet itself looks like sharp raised eye brow starring with some raunchiness.Chrome inserts added on fog lamps & rear lamps looks like an aftermarket job but works well with design.

The Chevrolet Beat was unveiled at the 2007 New York International Auto Show alongside two other concept vehicles, the Trax and the Groove, GM conducted a poll testing the popularity of the Beat, Trax and Groove concepts on a Chevrolet website, with the Beat receiving nearly 50% of the vote, which ultimately determined the car making it into production.

The Beat's design is very unique and if I was to choose the most appealing design among the existing bunch of hatches in this price range, I'd single out the Beat over the Suzuki A-Star and Ford Figo. Despite being a replacement for the immensely popular Chevrolet Spark in other countries, look at the level of departure in terms of design and styling. Sure, the Spark originally is rebadged Daewoo Matiz with bits and pieces changed, but even then Chevrolet took the Beat to an all new level, leaving nothing untouched. This isn't exactly the case with other car makers who stick to the existing model for a start in the design studio. Suzuki and Tata come to mind as examples while I write this story.

While I was speaking to Ed Welburn earlier this year on the Beat's design, he said he moved the rear door handle closer to the C-Pillar as that worked for them. It helps the car move smoother through the air and the entire rear portion could be compressed by 50-60mm without affecting rear passenger space. The only let down is when the kids want to get in, they'll have to reach for it.

Ed Welburn, GM’s Global Design Chief also spoke about the importance of design in today's world. He said a brand needs to stand for something and that is represented by design. Customers today appreciate contemporary and spirited design and that’s what we have done to Beat. All the pain taken by the GM has resulted in a striking car and that answers our first question, this car actually stands apart.

can't see anything above? head directly to the Chevrolet Beat Design and Styling Image Gallery for images